The previous post about Lake Andes described the lake on the Yankton Sioux Reservation that has overtopped its banks over a state highway and has made access to the town of Lake Andes impassable from the east. Since the writing of that piece I am told that someone came out and dumped a bunch of sandbags…

There is a community just south and east of the center of Lake Andes that is referred to as “housing” or Indian Housing. These houses are administered by the Tribal Government through the Yankton Sioux Housing, administered by the US Federal Program: Housing and Urban Development (HUD) in a subset of grants/programs Public Indian Housing, Office of Native American Programs, Indian Housing (that is a mouthful). The houses in this development are divided into old housing (26 houses) and new housing (40 houses) with a total of 66 houses. According to the Yankton Sioux Tribe’s website, there are 252 units (http://dakota57380sd.tripod.com/ystha.html) under supervision on the reservation under this office, so this community represents more than 25% of the provided housing. While I am told that no houses have been built here in more than 25 years, houses are renovated from time to time, though many stand boarded up and empty and uninhabitable.

The houses are also located just shy of the approaching new south shore of Lake Andes. Getting to the housing posed a challenge, as the flooded road has cut off easy access from Lake Andes. “A woman drove her truck out in that water yesterday,” we were told. “She didn’t make it, and she ruined her engine.” The state highway is not only flooded, but given the state of the parallel bike path just crumbling under the rising lake waters, is most likely undercut and crumbling under that moving water.

First, our team decided to cross through the farmer’s fields between the highway and housing. We took our bicycles. As we cut through a tribal member’s yard, a man told us that no one was crossing that way in the last day or so because the ground was too wet. We decided to test it anyway. Within about 10 minutes it became clear we were not going to be able to cross the fields. Our bikes were cemented still by the mud which has a high clay content. Our shoes were caked in the dark stuff. We retreated to the road, dug the mud out of the fenders and wheels and headed back to town to ditch the bike idea.

Next, we decided to borrow a truck for the dirt road. (My city car, on a previous day driving on dirt roads north of Lake Andes, ended up with a rock grinding in the wheel well, undercarriage torn off, and damaged serpentine belt, which needed to be replaced.) The road over to housing is a dirt road less than a mile south of Lake Andes that drives between farmer fields. First we stopped just across the road where the mouth of a tunnel is gushing water and a flock of pelicans, cormorants, and herons were feeding. This tunnel is said to connect the water from Lake Andes just west of the housing, run the water under the farmer’s fields between and eventually to Svatos Bay and Lake Case (aka the Missouri River). Dozens of dead sizable carp littered the area around the outlet. And one lay gasping in the field, most likely cast off from one of the pelicans. We noted the high volume of water and then continued across the road to housing. The dirt road is washboarded and potholed and we didn’t get above 25 miles per hour across the land and up the hill. I could see farmers pulling haybales in the fields and we passed a few cars coming from housing.
The flooded lake across 50/18/281 has cut the community off from the town of Lake Andes where the grocery store, gas station, hardware store, lumber yard, and other services and payment offices are located. Residents and the Yankton shuttle now need to drive up over the hill on a dirt road to bypass and get into town or to their jobs at the casino. The dirt road is in bad shape as my team drove it to get into the community. “My car is getting messed up having to drive that road every time we want to get to town. And they are speculating that the other road is going to be overtopped soon,” one resident told us. There are two paved roads that connect housing to the state highway 50/18/281. The road that connects further east is still passable and gives residents access to Wagner, about 20 miles to the east and south. The road that connects to Lake Andes which is about 1 mile west and north is the one that is impassable. “Those semis keep coming through here and our roads can’t handle it. They are driving too fast too for all the kids and pets around here,” one resident said. The tractor trailers that are hauling various things are using Indian Housing roads as cut throughs to meet up with the state highways on the opposite side of the dirt road pass.

From above the community, you can see how close the lake flood is to the houses and the standing water in the yards glints in the sun. The yards and basements of most of these houses are flooded, and the sound of sump pumps drones on and off, with the related sound of pouring water out of the hoses and pipes onto the ground. Pools of water stood in the yard. Our team spoke with some of the residents in the community about their basements and, with permission, were able to go into the basements to document the water damage and mold. We also documented the yards and the areas where the sump pump outlets drain the water.


We spoke with residents who had water in their basements as early as November and December. One family had a sick baby due to the related mold that got into the walls and floors of the house, and Indian Health Services came out with Housing to get a new sump pump and rigged piping away from the house and into the street. The piping was partial PVC piping and jointing, and partial piece of gutter, and while the basement was dry, there was still evidence of mold. That resident told us that if they did not leave the basement windows open, the smell became strong and the mold came back. They were told to bleach the walls regularly to keep out the mold, though one family member had to throw out her bed because the mold from the wall had corrupted her bed too. Bleach was not enough to keep the mold at bay.

“Everyone around here is sick. And we’ve been sick for more than a month. We think it is from what is coming up from the basements,” one resident said.

Another house we entered told us that they had mushrooms growing in their basement and when we entered the water was about 4 inches deep, even with the sump pump. One look outside at the sump pump destination told us why. The pipe was sticking out about two or three feet from the wall of the house, periodically throwing out heaps of water that created an enormous pool along the entire back of the house’s foundation. The pump was just recycling water from the basement to the backyard and to seep back in again.

Another few houses visited and we saw similar situations of water seeping in along the seams of the basement floor. Sump pumps piping water just out into the backyard and against house foundations, rather than being snaked away from the house with a hose or pipe. One sump pump pond formed just around the resident’s propane container, undercutting the legs.

Our guess is that this is groundwater connected with that approaching lakebed and nearby creek. Mold smattered the walls and floors and some of the possessions people left downstairs. Some of the residents are elderly and could not get the beds, bedding, blankets, and clothes out of the basement before everything was ruined with the flood water. One Elder couple put a bed in the basement on top of commodity cans. It at least kept the bed out of the water, but ultimately with the moisture that bed will need to be thrown away.

One resident said, “That water come up and I didn’t know it. My light doesn’t turn on from upstairs and I was just going down to do laundry and I stepped off that last step and was shocked to step into water!”

Another Elder said, “I don’t even go down there, I just keep the door closed. I don’t know what it is, but I can’t stand that smell!” Her basement had 1 to 3 inches of standing water even with the sump pump going.

Washers and dryers sat up on boards and were still being used in some cases. Things are soaked through and moldering including quilting supplies, regalia, photographs, family heirlooms, and other valuables.

We were told about the local BIA officer, one is assigned to live within each housing development, who had a whole living area built in his basement and when the flooding started, he moved out. “I think he lost everything down there.”

When we asked what people plan to do about it, the responses were varied, but restrained. “There’s not a lot we can do,” one resident said. “We’ve asked for help, I’ve been asking since December. At first they just came out and replaced my sump pump. Then that burnt out and they came back. After that they just tell us to wait for spring clean-up to put our things outside to be collected. I don’t want to put things out now because of the rats and mice making homes in the piles.” When we asked when spring clean-up was going to happen, no date had been issued. 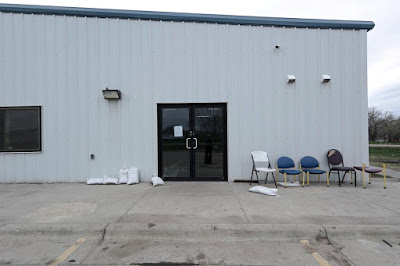 Our last stop was the police station and community center where we saw sandbags scattered about, some broken open. We spoke to the man on staff who told us that about 5 inches of water had come in in March, flowing under the front door and seeping in through the gymnasium. They responded by sandbagging and using a pump to eliminate the water. Since then no more water had come in. The Pow-Wow grounds are inundated just on the other side of the road from the community center. The cook-houses sitting in about a foot of water, and the old commodities house sat in water.

Another resident mused, “This is the last push for us to move out of here. I don’t know if this community is going to survive this flood once the spring rains come. That lake just keeps creeping up.”

As we stood at the Pow-Wow grounds we heard the sound of an 18 wheeler and looked to see a big tractor trailer coming into the community. Lifting my camera, I shot a picture and the truck stopped. A moment later it started backing out of the road. A BIA Police cruiser came snaking by the truck, but no one stopped to talk. We watched as that big truck struggled until it was turned around and headed back out onto the highway.