Next destination is Mekong and Xayaburi Dam in news.

I have wrapped up my time in Ethiopia and starting to look at my next case study. Leaving for Mekong field work this week. Here is a recent article about the situation with the dam I hope to study in Laos:

Vietnam and Cambodia hit back at landmark Laos dam 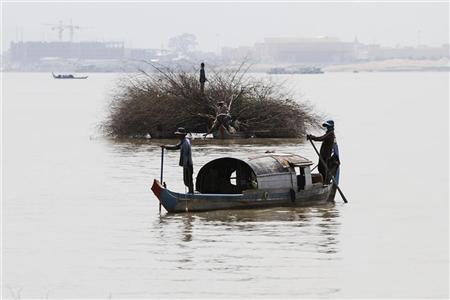 By Amy Sawitta Lefevre and Paul Carsten
BANGKOK | Fri Jan 18, 2013 5:05am EST
(Reuters) - Vietnam urged Laos to halt constructionof a $3.5 billion hydropower dam pending further study, environmental activists said on Friday after a meeting of the Mekong River Commission.
The activists said Cambodia, also downriver from the Xayaburi dam, accused Laos during heated discussions on Wednesday and Thursday of failing to consult on the project.
The dam in northern Laos, the first of 11 planned for the lower Mekong river running through Southeast Asia, threatens the livelihood of tens of millions who depend on the river's aquatic resources, activists say.
"Vietnam requested that no further developments on the Mekong mainstream occur until the Mekong mainstream dams study agreed upon at least year's Council Meeting is completed," International Rivers, an NGO devoted to river conservation, said in a statement.
"The Cambodian delegation asserted that Laos had misinterpreted the Mekong Agreement."
Officials from Cambodia and Vietnam were not immediately available for comment.
Ministers from member countries that make up the Mekong RiverCommission (MRC) overseeing the river's development -- Vietnam, Cambodia, Laos and Thailand -- met in northern Laos on Wednesday and Thursday.
The MRC is bound by treaty to hold inter-governmental consultations before dams are built. But members have no veto.
"In the absence of an agreement, other countries can disagree if they like but this can't stop Laos," said Jian-hua Meng, a specialist in sustainable hydropower at the World Wildlife Fund.
"The role of the MRC is now being questioned along with the level of investment put in the organization."
TURNING POINT
In December 2011, MRC member states agreed to conduct new environmental impact assessments before construction proceeded, but last August Ch Karnchang PCL, the Thai construction company behind the project, said it had resumed work.
A groundbreaking ceremony in November signaled the formal start of construction, said Meng.
Ch Karnchang's 50 percent-owned subsidiary, Xayaburi Power Co, has received a 29-year concession from the Laotian government to operate the dam's power plant and Thailand is set to buy around 95 percent of the electricity generated.
Milton Osborne of the Lowy Institute, an Australian foreign policy think tank, said Xayaburi marked a turning-point that would enable others to build their own dams, including Cambodia.
He described as a "monstrous disaster" a proposal for a Chinese power company to build a dam at Sambor in northeastern Cambodia, on a tributary of the Mekong.
"It would be so disastrous, blocking one of the main fish migratory systems," he said by telephone.
Laos, Thailand, Vietnam and Cambodia share the lower stretches of the 4,000-km (2,500-mile) Mekong. Activists say dams could threaten food security in Cambodia and Vietnam.
The river provides up to 80 percent of the animal protein consumed in Cambodia and sediment and changes to river flow threaten the Mekong Delta, which contributes half of Vietnam's agricultural GDP.
Cambodia approved its own hydroelectric dams in November.
A second Cambodian project, the Lower Sesan dam in northern Stung Treng province, is a joint venture between Cambodian, Chinese and Vietnamese companies. Campaigners say it would reduce the fish catch in a country with malnutrition issues.
(Additional reporting by Prak Chan Thul in Phnom Penh; Editing by Alan Raybould and Ron Popeski)
Posted by Jennifer