IPE report covered by the Guardian

Under a section titled: Poverty Matters Blog, the Guardian (supported by the Gates foundation no less!) provides some coverage of the IPE report and what it means to finally have it released to the public.

The first thing I want to say though is the name of the blog is irritating. Just because of the label - would you want a story about you to appear in something entitled poverty matters? It is just as bad as being a statistic. Just as impersonal.

To me, the Renaissance Dam is not a symbol of poverty or an issue of poverty. Ethiopia is a poor country, yes. However, dams are symbols of progress, engineering skill, and modernity. The dam site is full of modern equipment, Ethiopian and foreign experts. The Renaissance Dam I think that it is a symbol of Ethiopia's internal political and economic stability - and change on the African continent - change that has not necessarily been successfully won on a large scale by the donor community. It was the 1960s that many African countries declared independence, the 1990s when apartheid finally came to an end. War has gripped much of the continent and still does...and right in the same neighborhood of Ethiopia. Ethiopia is war-free at the moment.

The opposite of war is creation.

I would suggest that though the report does not give definitive terms as to downstream impacts of the Renaissance Dam, it does symbolize the will for Ethiopia to cooperate and offer a level of transparency in the process of its own national development plans. This is necessary given the shared nature of the river. What is going on with Sudan, by the way? One of my colleagues, Ana Cascão, who is an expert on Nile water politics, brings up this question - "'Sudan's intentions [that] may instead cause the greatest long-term concern for Egypt. The Gerd would allow Sudan to siphon off more downstream water for farm irrigation, potentially allowing the republic to take more water from the Nile than allowed by an agreement signed with Egypt in 1959.' Sudan has achieved this leverage by engaging positively with the dam's construction..." Ana brings up an important point about the nature of the tripartite negotiations, but I wanted to highlight it here since it is sort of buried in the text.

Answer me this: how can anyone truly know, for sure, what downstream impacts are going to be of a dam on a river that has little to no hydrologic flow monitoring in Ethiopia, that has little to no data on sediment transport in Ethiopia, that has little to no data on precipitation/runoff in the Ethiopian highlands...? There are large and significant dams in between Renaissance and the Egyptian farmers in the Nile River Valley and that as long as Ethiopia is open to a gradual filling process of the reservoir, the issue of downstream impacts is negotiable and manageable with cooperative action? I think this can be answered even without the scientific numbers for the above data gaps. This is where the engineers can shine.

Again, drawing attention away from the high level diplomatic and economic argument, stepping forward instead of back as it were, one is left with very critical issues still - the issues of the environment - the river itself which is, in the reaches of Ethiopia, still wild - and the subsistence communities in Ethiopia and downstream in Sudan. Why aren't these issues getting a mention in these articles? Is the realm of high level governmental business all too attractive to pull attention away from? The dam is under development. There are 8500 workers out there working 24/7. They've made progress and continue to make progress regardless of what is going on behind closed doors and what appears in reports.

A journalist just wrote me today asking whether I am sure about the 20,000 people figure I have put forward in a paper I published. I am only as sure as the documents for resettlement I was able to read at the EEPCO project offices in Addis and at the dam site. The journalist suggested that he heard that the company is doing a recount. I suspect the number is higher, but not because of a recount. The 20,000 mostly Gumuz people in Ethiopia are not the only ones who will be directly impacted by the dam's construction. There is still an undocumented and unknown number of subsistence communities who live in Sudan, just over the border. How do I know? I don't from my own eyes, but I have a hunch. Plus, linguists who studied the Gumuz people produced maps that show the extent of the community follows the river valley right over the border. There are only 200,000 Gumuz people full stop, according to the little I could find in published literature about this ethnic minority. I think this is something to care about even if no one has ever heard of the Gumuz. I wish someone would get out there and document now.

Rant over, back to work. I defend my research this Friday at 10am PCT. Wish me luck! 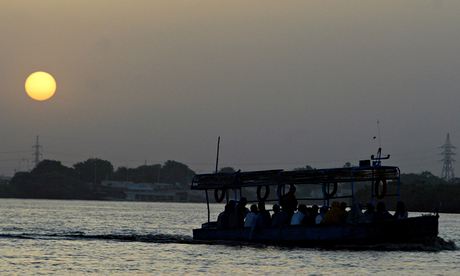 Villagers on the Nile in Khartoum. Ethiopia's Gerd dam may give Sudan greater water access than an agreement with Egypt allows. Photograph: Antony Njuguna/Reuters
The opening sentence of Egypt's new constitution describes the country as the river Nile's gift to Egyptians. It is a grand claim, but one that helps explain Egypt's indignation at the ongoing construction of a blockage on the Nile, thousands of miles upstream: the $4.7bn (£2.8bn) Grand Ethiopian Renaissance dam (Gerd).
Egyptians have long maintained that Ethiopia's dam project will dangerously deplete its water stocks – about 95% of which are derived from the world's longest river. A year ago, a former Egyptian water official boldly claimed that the Gerd might deprive Egypt of up to 10bn kilolitres, devastating roughly a million acres of farmland along the shores of the Nile.
"Then you might cross the Nile on the back of a camel," the former head of Egypt's National Water Research Centre said at the time, in what were highly contested claims.
Egyptian politicians have used such claims to portray the dam as a threat to national security, and have occasionally made ambiguous statements about the possibility of military action. For their part, the Ethiopian government sees the Gerd as a crucial developmental goal – a 6,000 megawatt source of surplus electricity that they could sell to foreign countries to boost their economy.
Last month, the saga took a fresh twist after the leak of a highly anticipated and hitherto suppressed report into the long-term effects of what would be Africa's largest hydroelectric dam. Written by two water experts from each of the three main countries concerned – Ethiopia, Egypt and Sudan – as well as international advisers, the report was seen as a much needed means of arbitration between the parties concerned.
But for nearly a year the report's contents were a mystery. After its submission last April, publication was suppressed at the request of one of the countries involved, enabling all concerned to make whatever claims they liked about its contents.
That should have changed at the end of March, when a leaked version(pdf) was finally published by the International Rivers Network (IRN), an independent group that campaigns against dams across the world. But rather than clarifying the dam's impact once and for all, the report has become the latest pawn in a war of words between Egypt and Ethiopia.
IRN said it showed that "big questions remain" and called for a halt to the dam's construction. But Ethiopian government spokesman Getachew Reda said the group was "absolutely biased", and "part of the smear campaign organised by Egypt". In the meantime, the dam's construction continues apace.
The report is nuanced and complex, and does not try to quantify exactly the likely downstream effect of the dam on Egypt's water supply. But its 48 pages nonetheless contain alarming findings. If the dam's reservoirs are filled during years of average or above-average rainfall, says the report, the hydroelectric capacity of Egypt's downstream Aswan High dam (Had) – which provides about 15% of Egypt's power – could face a temporary 6% decrease. But if filled during years of below-average rainfall, the Gerd may "significantly impact on water supply to Egypt and cause the loss of power generation at Had for extended periods".
Among other criticisms, the report warns that the dam's foundations may need further structural support to protect against sliding. It also says Ethiopia has done little to assess the Gerd's effect on local people, ecosystems and biodiversity. Based on these findings, the IRN concludes that the report "confirms Egypt's concerns that the project's impacts could be significant", and calls for construction to cease pending better analysis.
Not all independent analysts share this view, however. According to Dr Ana Cascão, a researcher at the Stockholm International Water Institutewhose doctoral thesis analysed hydropolitics in the Nile basin, Egypt fought for the report to be kept secret. Cascão argues the study is largely optimistic about the Gerd's impacts – "and that's why Egypt was not happy for it to be released". It is critical about the dam's social and environmental impact, she says, "but otherwise – in terms of dam safety and even in terms of water going downstream – the report is quite positive".
This is because the Gerd may eventually help to reduce the build-up of sediment in downstream dams like the Had, increasing capacity. The Gerd will also help to keep the Nile's flow – which presently fluctuates according to the amount of rainfall, potentially causing problems for downstream farmers even in Egypt – constant throughout the year. In terms of structural safety, Sudan – the country most endangered by any catastrophe at the Gerd – is satisfied with its construction.
Egypt's interests may actually be aligned with Ethiopia's, since Ethiopia will ultimately want to see as much water flow through the Gerd as possible in order to maximise hydroelectric power. It is, says Cascão, Sudan's intentions that may instead cause the greatest long-term concern for Egypt. The Gerd would allow Sudan to siphon off more downstream water for farm irrigation, potentially allowing the republic to take more water from the Nile than allowed by an agreement signed with Egypt in 1959.
Sudan has achieved this leverage by engaging positively with the dam's construction; Egypt's only means of reaching a grand compromise may be through similar engagement.
But it may now be too late. According to the Ethiopian government, an army of 8,500 builders, working 24 hours a day, has already completed about 30% of the 1,800 sq km site.