BBC Story About Gibe III and Ethiopia's Push Toward Modernization

I read a story in the BBC news about Ethiopia that a friend forwarded to me. The headline, "The People Pushed out of Ethiopia's Fertile Farmland" immediately drew my attention. I have pasted the article below for you to read. The author it seems really wanted a scoop and shamelessly ployed local police with rum to get it...and talks himself up in his publication in the BBC news. He could just as easily have told the story straight, left his part of the story out of it - I expected to read about the Mursi. The article is filled with eye catching photographs of the exotic body decorations, but lacks the complex voice of the Mursi.

Ethiopia is modernizing across the board. The unique ethnic groups that persist in the Jinka region, as well as in other pockets of remote areas throughout the country are all in jeopardy of losing their identities as modernity marches on. This is not a novel event - this is what happened in Canada, countries in Europe, Argentina, China, Australia...we know what happens - take a person's land for profit, and turn them out to different land to make a new way of life. Indigenous groups around the world have just gone the way of the Dodo. Mostly in silence. This is STILL happening in the United States with the indigenous peoples, the Native Americans. Indigenous way of life is under threat and every time we lose a language, an oral tradition, a custom, a joke, a skill contained within these diverse communities, we lose ourselves and the important pieces that add to the story of a complex and beautiful planet.

The story here should not be some journalist giving the Ethiopian authorities the slip - the story had the opportunity to talk about the landscape, the people, what is there and then the contrasting future...

The push for modernity is considered a form of dignity - as the only way for countries to be taken seriously. I don't believe that this push is from some menacing ideas of government officials who don't care about their people - quite the opposite - the officials who sell off land to the highest bidder, who disallow citizens to practice bush medicine or speak native tongues...they want to see modern medicine, safe drinking water, available schools for their people. They just have a funny and intolerant and insensitive manner of accomplishing this. I would challenge though, that how governments in developing countries today are going about modernizing is exactly the Western model - the precedent that development agencies and donors have promoted - systematizing agriculture, moving communities to places where they can get services, supplanting field educations with classroom educations...

I don't agree with this modern progress movement in its current form. I think we can do better collectively as a global community. I am alarmed at the possible loss of knowledge and dignity of peoples who happen to live in a particular political jurisdiction - wherever that modern march is snuffing out diverse and alternative ways of life. But I don't in my mind frame the government and the authorities as buffoons, drunks, and sinister. This is too easy to do - people are flawed. They are just people too, doing what they understand to be correct - and more than not, toward the end of a benefit somehow to someone.

I wish this journalist had focused on the greater story - there is so much to be told here - so much to capture before it is gone. He could have elevated the voices of the Mursi beyond this simple statement of disempowerment. People have agency, and I don't imagine that the people in these unique ethnic groups feel powerless against some government scheme. In fact, there have been murders associated with the land grabs. Maybe that is why the journalist needed special permits. Maybe next time he will take the time to get the right paperwork in order.

The people pushed out of Ethiopia's fertile farmland 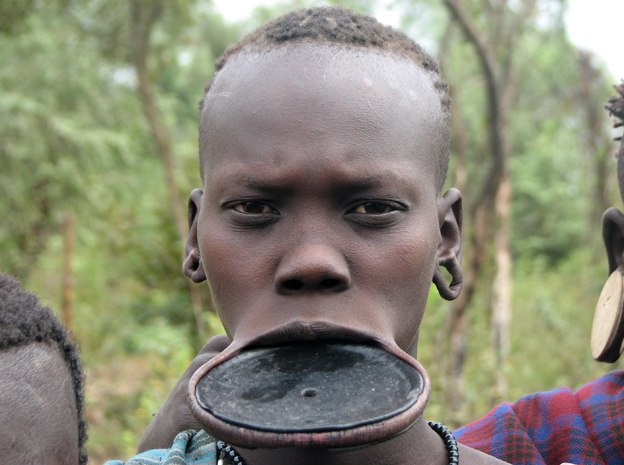 The construction of a huge dam in Ethiopia and the introduction of large-scale agricultural businesses has been controversial - finding out what local people think can be hard, but with the help of a bottle of rum nothing is impossible.
After waiting several weeks for letters of permission from various Ethiopian ministries, I begin my road trip into the country's southern lowlands.
I want to investigate the government's controversial plan to take over vast swathes of ancestral land, home to around 100,000 indigenous pastoralists, and turn it into a major centre for commercial agriculture, where foreign agribusinesses and government plantations would raise cash crops such as sugar and palm oil.
After driving 800km (497 miles) over two days through Ethiopia's lush highlands I begin my descent into the lower Omo valley. Here, where palaeontologists have discovered some of the oldest human remains on earth, some ancient ways of life cling on.
Continue reading the main story

Listen to From Our Own Correspondent for insight and analysis from BBC journalists, correspondents and writers from around the world
Broadcast on Radio 4 on Saturdays at 11:30 BST and BBC World Service
Some tourists can be found here seeking a glimpse of an Africa that lives in their imagination. But the government's plan to "modernise" this so-called "backward" area has made it inaccessible for journalists.
As my jeep bounces down into the valley, I watch as people decorated in white body paint and clad in elaborate jewellery made from feathers and cow horn herd their cows down the dusty track.
I arrive late in the afternoon at a village I won't name, hoping to speak to some Mursi people - a group of around 7,000 famous for wearing huge ornamental clay lip plates. 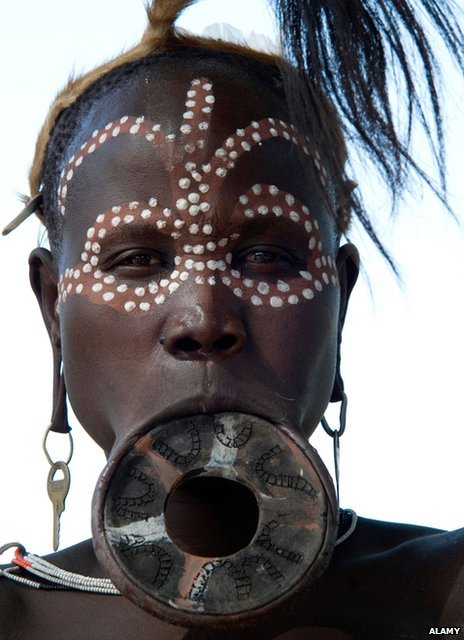 The Mursi way of life is in jeopardy. They are being resettled to make way for a major sugar plantation on their ancestral land - so ending their tradition of cattle herding.
Meanwhile, a massive new dam upstream will reduce the Omo River, ending its seasonal flood - and the food crops they grow on its banks.
It is without doubt one of the most sensitive stories in Ethiopia and one the government is keen to suppress.
Human rights groups have repeatedly criticised schemes like this, alleging that locals are being abused and coerced into compliance.
I'd spoken to local senior officials in the provincial capital of Jinka, before travelling into the remote savannah.
The suspicion is palpable as the chief of the south Omo zone lectures me. Local people and the area's reputation have been greatly harmed by the negative reports by foreigners, he says.
Eventually a frank exchange takes place and I secure verbal permission to report on the changes taking place in the valley. 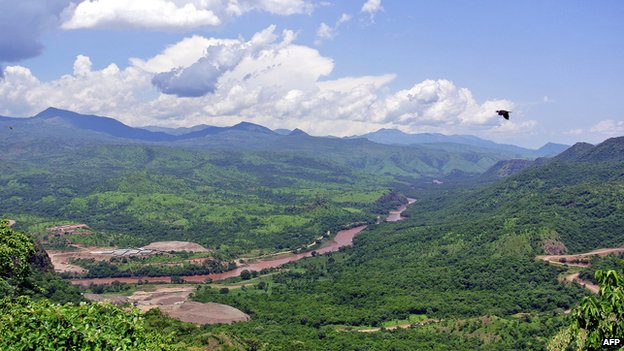 It seems prudent to let the Mursi tribe and attendant police warm to my presence before I start asking questions. After all, I have the whole evening.
But a brief chat with the tribe ends abruptly with the entrance of a police officer, wearing a replica Manchester United football shirt, vehemently waving a dog-eared copy of the country's constitution.
I am prohibited from talking to anyone and must immediately climb back into my jeep, drive back up the mountain and return to Jinka, he says.
As often in Ethiopia, he doesn't explain exactly why.
I object to driving through the wilderness at dusk on safety grounds and so a compromise is reached: I will pitch my hammock outside the police station, a short stroll away from the village, with armed guards watching my every move.
The political boss of the zone comes on the two-way radio. "This is house arrest," I protest. "No, just a misunderstanding," he replies. 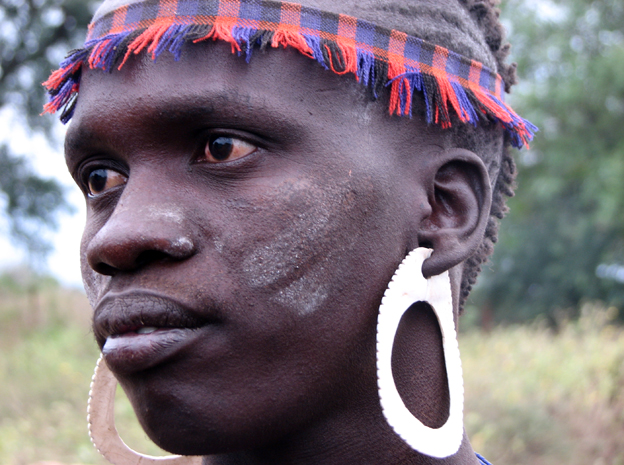 The prospect of returning home without interviews is unthinkable. My ruse is to distract my captors.
I sit them down for a meal of pasta and vegetables - and brimming beakers of spiced rum - in front of my laptop, which is playing an Ethiopian comedy.
After saying good night I strike out through the scrubland.
I run without sense of direction through bush and bog, crawl under fences, and negotiate large herds of noisy cattle. I have to find a village elder I met earlier, and interview him before policemen and their flashlights turn up.
So I am relieved to stumble on two boys milking their cows in the moonlight. They lead me to the elder's hut. The sound of so many rudely-awakened animals in our wake fills me with dread that searchlights are heading our way.
The moment arrives. I squat in front of the elder inside his mud dwelling, surrounded by his sleeping companions: several cows, a goat and a cat. My dictaphone is poised to record truths heard by few journalists in this media-muzzled region.
I ask him in broken Amharic what is going on. He tells me: "The government is telling us to sell our cattle and modernise like townspeople - they say our land is the property of the sugar corporation. We have not been asked what we want or need.
"If we do not accept the resettlement plans, we'll be taken to jail. How can we survive if we have no access to land, cattle or water?"
I promptly thank the elder for his time, apologise for disrupting his evening and head back to my open-air jail.
On reaching my hammock I find several dozing policemen and an empty bottle of rum. Mission accomplished. 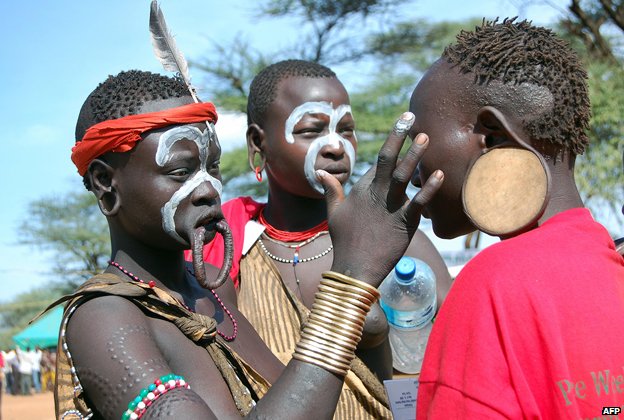