This weekend 10 high resolution maps I made for my dissertation research were recovered off of a drive and made available through the Transboundary Freshwater Dispute Database (TFDD) site.  The maps are of global transboundary basins, and specifically, the Mekong and Nile Rivers. The global maps show the experimental 2012 Human Security Index (HSI) and 2010 Human Development Index (HDI) scores delineated by transboundary basins. Looking at the individual components of these indices, such as literacy or life expectancy, yields interesting stories about upstream/downstream and developed/under-developed diplomacy and dynamics. (Those map analyses are not included in this collection, these show just the overall scores.)

The maps that pertain to both the Nile and Mekong River basins were created using the available TFDD data in 2014 as well as the HDI & HSI data previously mentioned. The TFDD is poised to release their new data files this fall which will include new basin polygons that feature the delta areas previously excluded. The TFDD team has also worked to identify even more internationally shared basins previously not identified in the collection. The number has gone from 276 to somewhere above 300 now. Maybe when the new data is released it will be time to redraw these maps to reflect the changes! 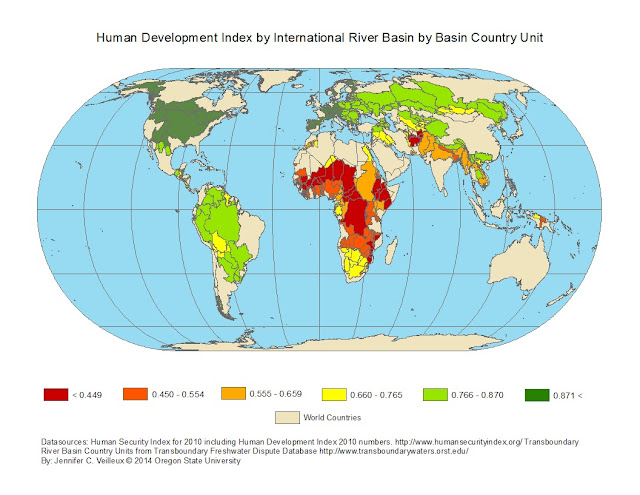