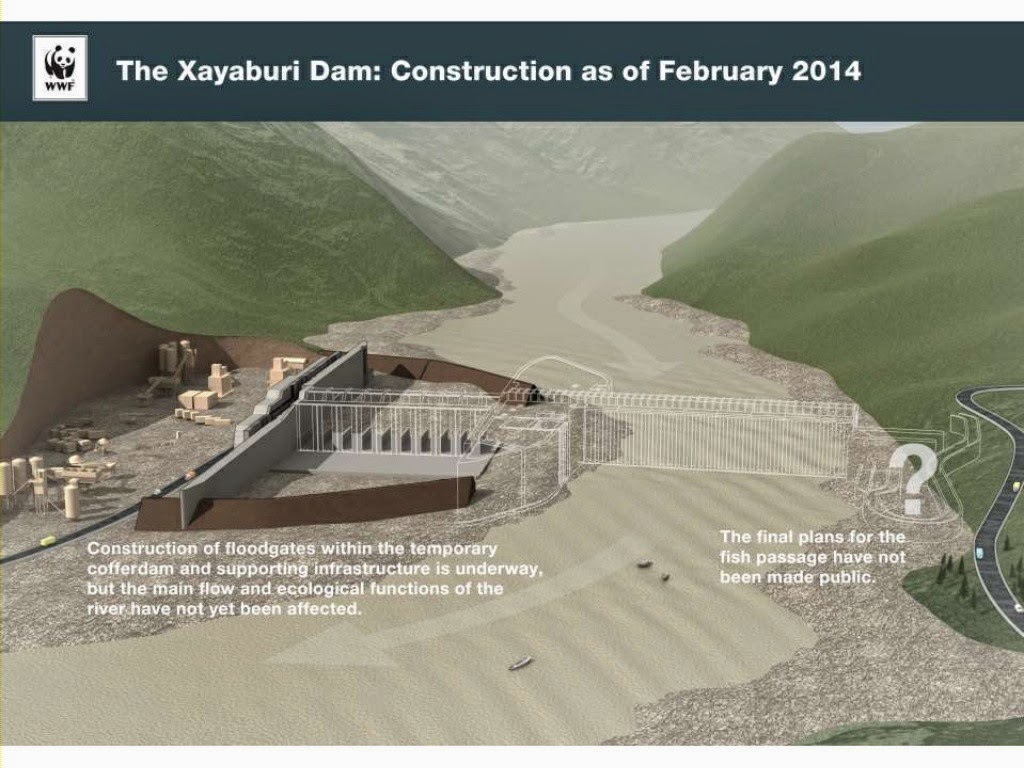 Xayaboury Power Co Ltd is currently studying fish swimming ability to evaluate the effectiveness of a demonstration fish passage facility at the Xayaboury hydropower project in northern Laos.
Deputy Minister of Energy and Mines Mr Viraphonh Viravong visited the site on Monday, accompanied by officials and members of the media.
Engineering consultancy firm Poyry Energy was hired to work on the project. Poyry Energy then contracted Fishtek Consulting to evaluate whether Mekong fish would be able to use a fish pass at the run-of-river Xayaboury hydropower dam.
Fishtek is a specialised international fishery consultancy based in Devon, UK. They are a leading British consultancy in evaluating the interaction between hydropower projects and fish.
Fishtek Consulting' technical director Mr Tobias Coe said the fish pass design was based on the best practice principles of taking the swimming abilities of fish into consideration when designing fish pass systems, tailoring them to specific species.
“What that means is we are not taking generic principles of fish pass design . . . this fish pass will be designed for the species that are present in the river Mekong,” Mr Coe said.
He said different tests were underway in the stream looking into the behaviour of the key fish species at different water velocities and how they react to obstructions, as well as the pure physiology of the fish and their swimming capabilities.
In response to concerns raised by Mekong Commission Committee stakeholders and experts, the initial design of the Xayaboury scheme was modified to incorporate sustainable solutions for local Mekong fish populations to pass through the hydropower dam.
One approach is a land-based “fish ladder” that goes around the barrage at an appropriate gradient or slope.
Fish swimming ability tests began in May this year and are ongoing. They will allow scientists to understand the behaviour of fish species and allow for the optimum design of the structures to allow all key fish species to pass through the hydropower dam.
The current fish pass design proposes four vertical slots of different sizes controlling the water flow between pools 20 metres wide and 8 metres long. Fish have to burst-swim through the slots before traveling the pool upstream to the next set of slots.
An experimental facility with a 24 metres long flume has been built at the construction site to investigate the specific swimming abilities of different species of fish.
Three different experimental techniques are being applied to ‘lead' species including Pa Pak Ta Leuang (Hypsibarbus Pierrei), Pa Tep (Paralaubuca Typus), Pa Dok Ngieu (Cycloheilichthys Repasson), Pa Nyon Nuat (Clupisoma Sinense), Pa Soi Hua Po (Henicorhynchus Siamensis) and Pa Nyon Thong Kom (Pseudolais Pleurotaenia).
The tests being performed include the velocity barrier test, the burst swimming test and the ‘umax' method. Tests will be completed in the next few weeks and conclusions about the design will then be made.
Interim conclusions confirm that a design velocity of about 1.2 metres per second can be used in the main slots of the fish pass. At this speed most of the fish species require several attempts to enter the flume during the velocity barrier tests. Construction of the US$3.5-billion 1,285 MW Xayaboury hydropower plant began at the end of 2012 and is now 30 percent complete.
Commercial operation is slated to begin in 2019. The dam's operational phase covers 29 years of the concession agreement from 2019 to 2048, before ownership is transferred to the Lao government.
Posted by Jennifer No comments:

Aaron Wolf's work from the TFDD is featured in Popular Science's water issue: they highlight Ethiopia's Renaissance Dam on the Nile River

Where Will The World's Water Conflicts Erupt? [Infographic] | Popular Science

Popular Science released an issue on water in May and it includes an infographic using data from the Transboundary Freshwater Dispute Databases (TFDD). Language from our news release: As the climate shifts, rivers will both flood and dry up more often, according to the latest report from the Intergovernmental Panel on Climate Change. Shortages are especially likely in parts of the world already strapped for water, so political scientists expect feuds will become even more intense. To track disputes worldwide, researchers at Oregon State University spent a decade building a comprehensive database of international exchanges—-both conflicts and alliances—over shared water resources.

The infographic maps the world's international basins and the number of events recorded by basin. The basins with high numbers of conflict leaning events are isolated as "hotspots" and subject to further investigation on how sensitive the basin is to conflict. Check it out and check out the rest of the water issue! 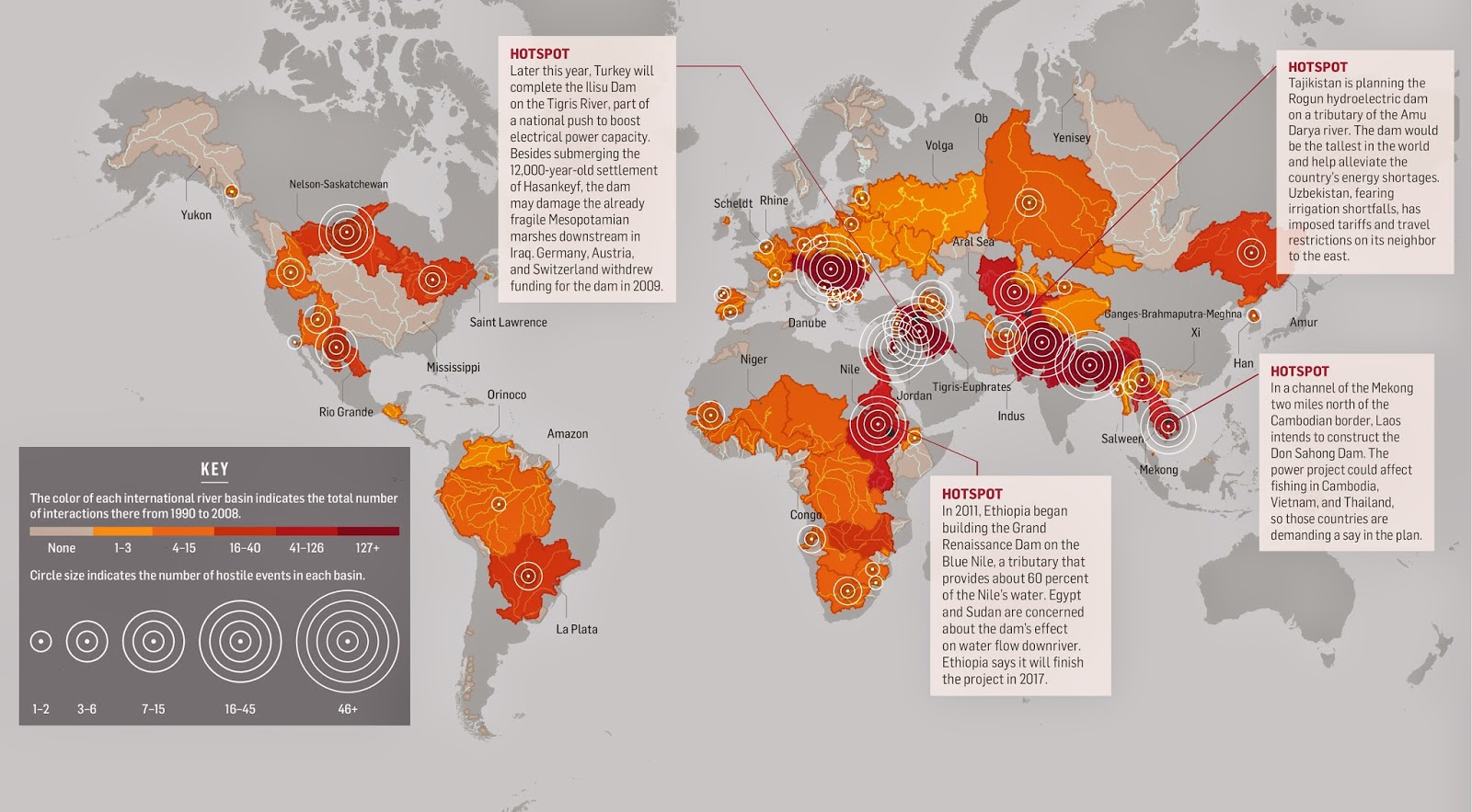