Relative peace in Sudan means increased development, specifically development for water-use and food production. While Sudan is one of the poorest countries in the region, it contains a great amount of under-exploited natural resources in which foreign investment from China, India, and Saudi Arabia are interested. Saudi Arabia is increasingly a player in development projects in East Africa, investing in agricultural and hydropower infrastructure in Sudan.

A recent article in Al-Monitor claims that Sudan is only commercially exploiting 30 million of its 280 million potentially arable acres. Agriculture is the largest consumer of water in the world and accounts for anywhere between 70%-95% of water use. In Sudan, the Nile River constitutes more than 90% of any water resource and the majority of Sudan's population relies on the Nile for day-to-day needs. Enter foreign investment in agriculture in the form of Saudi Arabia. Suddenly there can be a change in the water budget for Sudan and Egypt.

While Sudan is allocated a specific amount of water under the Nile Treaty, the Treaty is currently under question given Ethiopia's Renaissance Dam project challenging the legitimacy of a Treaty signed during the colonial era. Also, upstream countries are demanding water allocation for development purposes through developing a new official document called the Cooperative Framework Agreement with the Nile Basin Initiative.

There is currently no Nile basin-wide management for water resources. Any investment that Saudi is making in Sudan is most likely for agricultural export to Saudi Arabia. Embedding water in crops is considered a virtual water trade. There is a great deal of literature on this idea of virtual water, coined by Dr. Tony Allen. Whatever water is embedded in crops, as Saudi investment increases, will be less water for Sudan's downstream neighbor, Egypt, to use. However, keeping track of this sort of water leaving Sudan will take vigilant tracking of food exports. Also, agricultural production increases the evapotranspiration of water, meaning - more water is sucked out of the ground and expelled into the air. Given the arid nature of Sudan, this could mean that the water actually leaves the basin in the wind, which will cause a change in the local and regional climate. This effect is compounded by global climate change.

Development of water resources and land resources connected to the Nile waters is something that needs to be better studied and understood as millions of people rely on this water. There is no alternative.

Sudanese farmer works on his corn farm on the banks of the Nile River in Khartoum, Nov. 11, 2009. (photo by REUTERS/Mohamed Nureldin Abdallah)

CAIRO — Saudi Arabia has been steadily boosting its agricultural investments in Sudan in recent years, raising concerns in Cairo that any increase in Sudan’s use of Nile River water will come at the expense of Egypt’s share.
Summary⎙ Print Experts say Egypt can’t afford to remain stoic about Sudan’s ever-rising water needs.
Author Walaa HusseinPosted January 6, 2016
TranslatorJoelle El-Khoury
Riyadh has been encouraging Saudi investors to pump more money into Sudan in conjunction with Sudan’s participation in the Saudi-led intervention against the Houthis in Yemen. Yet internal reports prepared by Egypt’s Water Resources and Irrigation Ministry, along with the Agriculture and Land Reclamation Ministry, confirm that Sudan is already using its entire allotment of Nile water, according to a government official briefed on the issue who spoke to Al-Monitor on condition of anonymity.
The investments, which include building dams on the Nile in Sudan, threaten Egypt's water security, an Egyptian government source confirmed to Al-Monitor.
On Nov. 3, Saudi Arabia agreed to provide $1.7 billion to construct three dams in northern Sudan. The Kajbar, Dal and Al-Shiraik dams should be completed in five years. That amount comes in addition to $500 million Riyadh has provided for other water and electricity projects and the cultivation of a new 1 million acre area on the banks of the Atbara and Setit rivers in eastern Sudan.
The total amount of arable land in Sudan is estimated at almost 208 million acres, which is equivalent to 45% of the Arab world’s arable land, out of which only 30 million acres are being used. At the Summit of Arab Leaders in Sharm el-Sheikh, Egypt, in March 2015, Sudanese President Omar al-Bashir announced that Sudan had taken a series of measures to implement an initiative on Arab food security and was ready to receive Arab investments. The summit nearly coincided with the second Saudi-Sudanese investment forum in Riyadh in late February 2015, which confirmed the increase of Saudi investments in Sudan, currently pegged at more than $13 billion. Then at the Sudanese-United Arab Emirates forum in Abu Dhabi in May 2015, investment projects worth $16 billion were discussed. The UAE’s current investments in Sudan amount to $6 billion.
Water experts in Egypt have repeatedly warned against expanding agricultural areas in Sudan, saying it will be disastrous for Egypt. Moreover, the Egyptian government has faced a wave of opposition to its paradoxical announcement that Cairo will participate in agricultural projects in Sudan. Egyptian Water Minister Hossam el-Moghazy’s confirmed to Al-Monitor last year that Egypt’s agriculture projects in Sudan will depend on alternatives for the Nile water, be they groundwater or rainwater.
Former Egyptian Minister of Water Resources and Irrigation Mohamed Nasr Eldin Allam told Al-Monitor that Sudan is currently using its entire share of Nile water, although Khartoum has repeatedly claimed otherwise. He noted, “Before I left the ministry in 2011, I was supervising the establishment of a water scale to determine Sudan’s use of the Nile water. It showed that Sudan was using its total 18.5 billion cubic meter [almost 5 trillion gallon] share of the water, as stipulated in the Nile Water Agreement of 1959.” Allam stressed that any new agricultural investments in Sudan using Nile water would be deducted from Egypt’s share and would be a violation of that agreement.
Allam said Egypt must fast-track meetings of the Egyptian-Sudanese joint body tasked with Nile water management, “express Cairo’s fears regarding those new investments and make things perfectly clear with Sudan.” He warned that the Sudanese investment plan that is currently on the table and involves Saudi Arabia, some Gulf states, Iran and Turkey confirms that Sudan needs much more than its current share of water, but the plan is unclear about where the water will come from.
Allam said it will be no easy matter for Egypt to arrange discussions with the Arab investors — most notably Saudi Arabia — to guarantee an alternative water source and to take into account Egypt’s share. He added, “Sudan may consider it an act hostile to development on its soil, and we need to talk to Sudan directly before resorting to such a step.”
Haitham Awad, head of the Irrigation and Water Hydraulics Department at Alexandria University, told Al-Monitor, “Sudan has the right to develop its territory and improve the people’s standard of living, while taking into account Egypt’s right to the water. The plan focusing on the new dams, which is on the table, will undoubtedly increase its water consumption. In addition, the evaporated water [from the new dams] will cause the amount of water reaching Egypt to decrease, which poses a threat to Cairo’s share of water.”
Awad added, “Any expansion of Sudan’s agricultural areas by 10,000 [acres], without taking into account its share of the water, will cause the destruction of 7,000 [acres] of agricultural land in Egypt." He said, "Talk about the possibility of resorting to groundwater for agriculture in Sudan is illogical” because of the cost of drilling wells. Awad criticized Cairo’s policies that encourage Egyptian agricultural investment in Sudan. He said, “Any extra use of the water in Sudan will be at the expense of the Egyptian share.”
Cairo has remained silent about the escalating boundary dispute with Sudan over the Hala'ib Triangle, as well as the Sudanese position favoring Ethiopia in the construction of the Grand Renaissance Dam, which violates the 1959 agreement. It will probably take the same approach to its concerns about the suggested increased agricultural investments in Sudan, particularly since the investors are Saudis and since Cairo is keen not to further complicate the current Egyptian-Saudi ties.

A recent paper that I coauthored with Dr. Elizabeth Anderson, a fish and river ecologist, released today with the L&O Bulletin Issue 1, Vol. 25. The paper describes broad issues of water security for river communities, both the human and the ecosystems, related to environmental changes and development challenges. You can find the full article on the L&O website or contact me directly if you do not have access and would like to read it. The issue cover is an image taken from the Portraits from Rivers of Change series of the Mekong River. 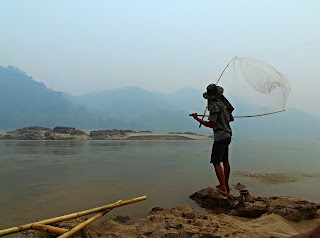 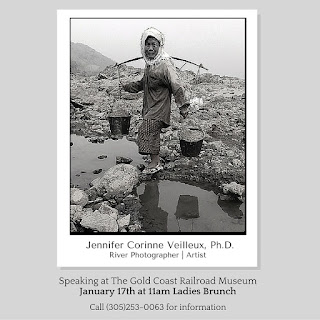 If you are in the Miami area and would like to come out to hear me speak on women, water, and my work, please find the above contact and booking information for 17 January.
Posted by Jennifer No comments: