Upcoming University Panel on the Stand at Standing Rock

Florida International University asked me to help organize a panel on the topic of the Stand at Standing Rock - Indigenous People's rights in America and US Government preference for the oil industry in claiming energy security priority over water security, food security, and human security. In a remarkably quick turnaround - three FIU groups came together to make this happen:


For this panel Faith Spotted Eagle, an Elder from the Yankton Sioux Tribe and Treaty Council member, as well as member of the Brave Heart Society, an indigenous society for grandmothers to keep Dakota Tradition, will be our Keynote Speaker. She will be joined by Bob Billie, spiritual leader of the local Miccosukee Tribe, Sam Tommie environmental activist and filmmaker from the Seminole Tribe, Dennis Wiedman medical and environmental anthropologist who works with Indigenous Peoples in Florida and Oklahoma as well as Director of FIU's Global Indigenous Forum, Manuel Gomez lawyer working on the Chevron oil case in Ecuador with Indigenous People, and I will moderate and contribute as a water security geographer and river scientist working with Indigenous People on conflicts of modernity in the Nile, Mekong, and now the Missouri basins.

I hope you can join us for this discussion about one of the most pressing issues in America at this moment in time. 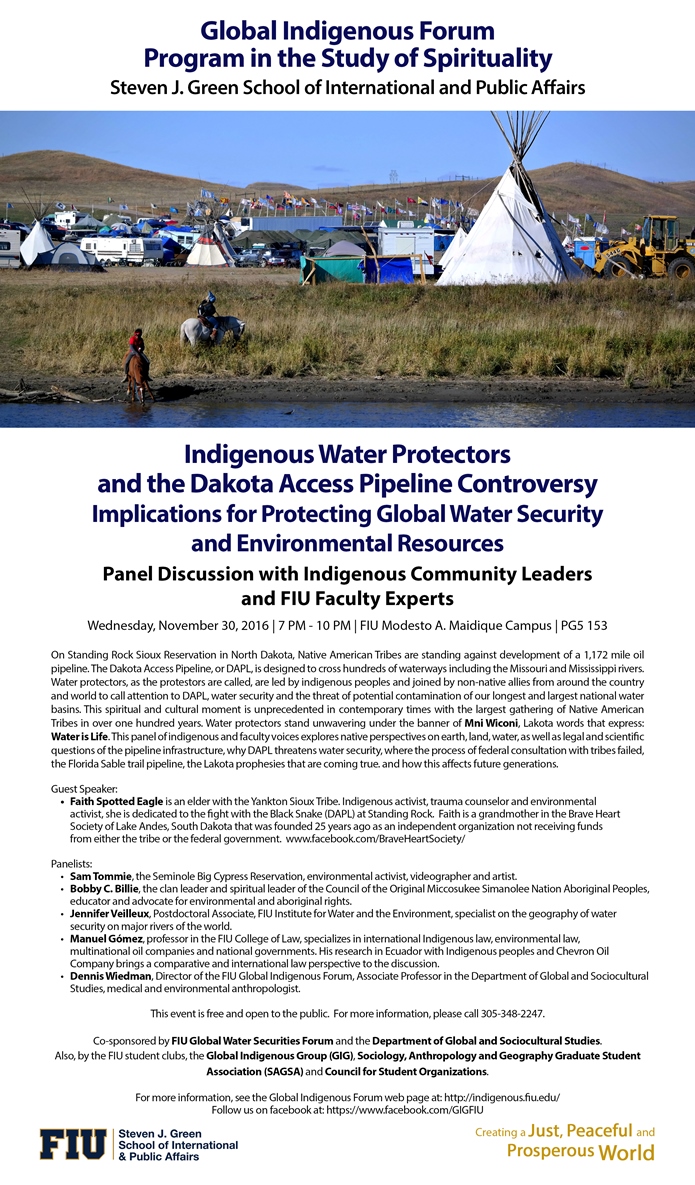 Please find the USACE Environmental Assessment of the DAPL project here. You have to download the pdf which takes awhile. I see how my holiday weekend is going to go.
Posted by Jennifer No comments:

Thanks to journalist Lydsey Gilpin, the team's ongoing research efforts were highlighted this weekend on High Cuuntry News website, a news source that focuses on the American West people and environment. The article, These Maps Help Fill the Information Gaps About the Dakota Access Pipeline, traces the impetus for why I put together the team and then what we've produced so far. The maps that I along with Drs. Mariya Pak & Candice Weems created were featured. Very exciting for the team and helps create more visibility about our narrative, which is taking the part of the indigenous story - one that is being told only marginally in the news.

Our team's work is collecting scientific basis to highlight threats to the Missouri River Basin human and ecological systems from the exemption permitted Dakota Access Pipeline (DAPL).  Yes, the pipeline went through some permitting process - but it was not a normal or complete process. While DAPL has only had to put forward their project in small segments to bypass NEPA and Clean Water Act consideration, my team is attempting to pull together a quasi environmental impact assessment from the macro perspective - not what are the 1000 foot segment threats of this pipeline project to a certain place, but what is the 1172 mile threat of this pipeline project to the overall human and environmental systems? The economic, political, cultural, and environmental aspects of the Missouri River Basin, and eventually the Mississippi River Basin (the Missouri provides about 45% annual flow to the Mississippi - impacts can flow all the way to the Gulf of Mexico. And we are most interested in the minority that are vocalizing their discontent - the Indigenous People, the American Indians, the Native Americans - several names for the same group of people - the people who are leading the movement in North Dakota and around the country.

The team keeps expanding - we are collectively identifying the gaps in the story - the largest one of all is the voice of the Indigenous People of the United States of America.
Posted by Jennifer No comments:

On my website, I put up a simple project page for:

You can find high resolution images of our two published maps and there are more maps in the making as I write this. Also, I am creating a list of the some of our team members, so you can get an idea of the interdisciplinary background we collectively possess. Our potential projects are listed  and I hope in the coming weeks we will start to populate those links as well. For now, they are simply - coming soon.

I am putting out a public call for anyone interested to help out with small pieces of what we are doing. There are many tasks that take 3 -5 hours of concentrated attention. Please let me know if you want to work on something by contacting me through my website.


Posted by Jennifer No comments:

Fundraising, Please Contribute So Our Research Gets Back to the Tribes

I am currently fundraising to send myself back north to share the analysis and work my team has pulled together this last month. So far I have raised close to half of the amount I need for logistics - total is estimated at $3000 for airfare, ground transportation, hotels, food, materials, etc.

My trip is scheduled for mid-November, I have bought the plane tickets already, and I plan to bring our new maps, a report, and more dialogue for collaboration with the Elders I met in Standing Rock on my last trip. Since this is a collaboration with the Tribes, I require their input about where we are taking this work and we would like to do this face-to-face meeting.

We would also like to further discuss plans for continued collaboration in mapping the oral histories and traditional knowledge from the Tribes about the landscape in the Missouri River Basin. I am currently looking for funding for that as well, but that is another situation!

Please consider contributing to my fundraiser, every dollar counts. 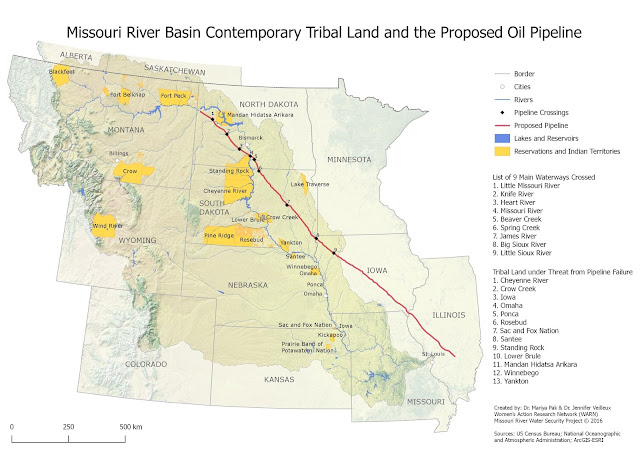 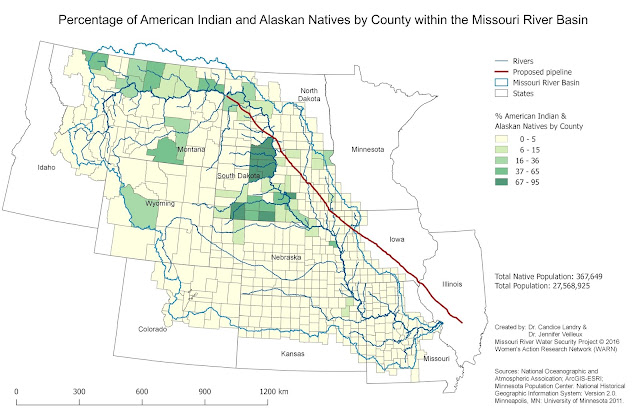 On Standing Rock Sioux Reservation in North Dakota, Native American Tribes are standing against development of a 1,172 mile oil pipeline. Mississippi Rivers. The Dakota Access Pipeline, or DAPL, is designed to cross hundreds of waterways including the Missouri and Mississippi Rivers.

Water protectors are led by indigenous peoples and joined by non-native allies from around the country and world. More than 240 recognized Tribes stand in solidarity with Standing Rock against this threat of potential contamination of our longest and largest national water basins. This moment is unprecendented in contempoary times: this is the largest gathering of Native American Tribes. They stand unwavering under the banner of Mni Wiconi, Lakota words that express: Water is Life.

Jennifer will share the story of the movement as she understands it, her trip to North Dakota, and her current research efforts toward understanding and describing threats to water security for people and ecosystems from this development.