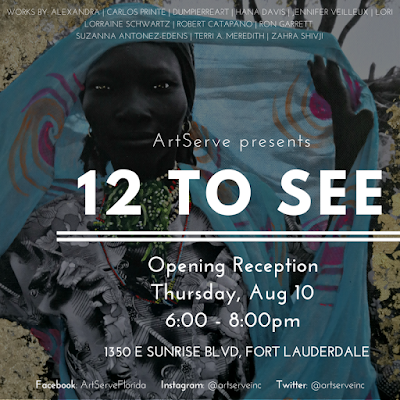 I will participate in the 12 to See art show hosted by Artserve in Fort Lauderdale, Florida, USA from August 4-25 2017. The work I am showing includes 8 paintings of photographic portraits taken of the Gumuz People in 2012 near to the Grand Ethiopian Renaissance Dam Benishangul-Gumuz, Ethiopia. The GERD is scheduled to commission this year and some news reports state that the reservoir is currently filling.

One of my colleagues traveled to the dam last year and contacted me via Skype to tell me that the trees had been felled and the valley prepared for the reservoir, though many of the people were still living in the valley. No one had anything to report on the displacement villages that were in the plans and since Ethiopia is still in a State of Emergency - essentially the government's lock down response to protests and potential civil war, it is near to impossible to get a straight story of what is happening over there. Short conversations I've had with some of the Ethiopian diaspora in Washington DC revealed that it is possible that the Gumuz have been incensed by moving in of other ethnic groups to mine the river gold and have taken to the bush to fight guerilla style. I also heard about two dozen Gumuz People had been killed in a clash near the dam.

The paintings call attention to the people who have been displaced by this project. Gumuz People are the main ethnicity in the valley and majority of the approximately 20,000 people who have been displaced. I chose images that demonstrate the breadth of life in the valley that I experienced when I visited in 2012 and included details of the political situation the people are facing. I feel that their culture, livelihoods, and identity since it is centered on the river, is in danger of complete disintegration once the river is replaced with a dammed reservoir. I hope I am wrong. In any case, I am bringing these paintings forward to a Western audience to heighten awareness that this sort of cultural genocide is still being perpetrated in the world.

Since there are only about 200,000 Gumuz speakers living along the Nile in Ethiopia and Sudan, the displacement figure of 20,000 accounts for close to 10% of the entire population. The people I met were living traditionally in a subsistence economy centered on the river. I shudder to think of what their fate will be living in government villages and receiving job training to become productive members of the greater Ethiopian economy. This is colonization. This is cultural genocide.
Posted by Jennifer No comments: