Southeast Asia is developing at a very aggressive rate. This includes lots of new dam projects. As of 2010, a Chinese firm completed an impact survey in the Southwest region of Cambodia to construct the Cheay Areng dam, according to Hydroworld.com. This project was slated for completion in 2015, but local villagers, along with monks from the nation's capital, Phenom Penh, are working to prevent Chinese developers from progressing with the project by protesting. Today's New York Times featured a 6 minute video that captures the story, mostly through imagery, and some from the mouths of the people themselves.

This project threatens people and protected forest called the Central Cardamom Protected Forest, some 10,000 hectares of forest slated to be submerged by flood under the storage reservoir.

There are myriad issues related to this dam project - why on earth would Cambodia and/or their Chinese partners select a dam site in a protected area where traditional communities reside??? - there are Siamese crocodiles slated for relocation, and apparently the current botched efforts to move them, excluding village participation. This is important because the crocodiles are guardian spirits and the forest is full of ancestor protection spirits, and the land is ancestral land. It becomes very difficult for local people to convince their spirits to move when there is relocation like this.

Certainly there are elements of culture and resources and resource access lost completely due to dam flooding. However, perhaps international coverage, awareness, and local protest will help bring everyone to the table to look for new solutions. A story about the valley and its natural and cultural treasures is featured on a site called AsiaLIFE, an online tourism guide to Cambodia, Thailand, and Vietnam (why no Laos???).

Reforestation to take back the desert: Green Wall in Africa?

Years ago I heard about an effort in China to plant a forest belt along the length of the Gobi desert in China. Apparently, this project, China's Great Green Wall, is scheduled for completion by 2050. A colleague turned me onto a similar effort in Africa against the advance of the Sahara desert. The effort to establish a Great Green Wall in Africa is covered in this recent article in Science Alert. The direct and indirect advantage of such an effort is an inspiration and an example of how things are changing on the continent.

Greenbelts or greenways are a great effort with potential to revitalize and retain soils, change local climate and temperatures, refresh and store water resources, provide an economic possibility for local communities, provide habitat, allow species migrations, allow human recreation spaces; in all, a positive engineered change of the landscape with water as the key piece.

In journalist Howard French's recent novel release - China's Second Continent - he highlights the incredible economic growth numbers of 8% to 11% in many African countries. Change in economics, climate, and development all over the continent bode well for future opportunities. I am excited about these positive changes and what comes next!

This week I am attending a super interesting workshop at SESYNC a social and environmental science integration institute affiliated with the University of Maryland. We are discussing the size and shape of using social media for science - not only for collecting scientific data by considering humans as sensors for the world - but for creating platforms to provide an interaction with internet users.

I find that creating this blog, posting information on the Nile or Mekong dam projects has created some engaged ability as a research scientist. What I mean by this is that I have developed about 15 new direct contacts through this blog who A. provided actual data in the form of papers, reports, geospatial information, or B. gave feedback and/or support or criticism of the content of the blog.

I am left with the question: how do I better engage my readers to comment and interact with me on a given blog post? Is it a limitation of my content? Is it the reality of blogs that they are primarily a one-way relay of information out, not so much attracting information in? Is there a mechanism to ask for different or specific content you'd like to see?

If you have any suggestions, please send me a message. Or leave me a comment?
Posted by Jennifer No comments:

My former college at Oregon State, the College of Earth, Ocean, and Atmospheric Sciences, just posted an interview I gave about my PhD research on their pages. The interview process was fun and cathartic. The interviewer, a local published author Abby Metzger, did a fabulous job of cutting out my digressions and focusing the text. I got to speak mostly about my work in the field in Ethiopia, highlighting the little discussed Gumuz People who will be displaced from the Renaissance Dam, their livelihoods completely altered.

Jennifer Veilleux in the Benishangul-Gumuz state of Ethiopia, interviewing a Gumuz woman in a village in the Blue Nile Valley.

Two years ago, the online newspaper Aljazeera ran a stark headline: Almost half of humanity will face water scarcity by 2030. Similar stories have splashed the front pages of major newspapers for nearly 20 years, with many predicting global water wars as greed, power, and scarcity collide.
Jennifer Veilleux sees a different picture. The recent Ph.D. graduate in Oregon State's geography program studied human dimensions of dam development on international rivers. Her work explored the complex intertwine between people and water, and how resource sharing can serve as a platform for peace rather than conflict.
"Water is needed and shared by every sector of human society and ecosystem. It shapes the physical and human landscape," she said. "I wanted to explore how different communities of people fit in when water is shared between countries and cultures, while examining how resource use can be cooperative."
Veilleux's research took her to Ethiopia's Blue Nile, where she spent five months interviewing urban Ethiopians, as well as rural communities who will be displaced by the Grand Ethiopian Renaissance Dam.
The dam presents both enormous opportunities and challenges for Ethiopia. On one hand, it will provide reliable power. "Only about 40 percent of Ethiopia has electricity. When complete, the massive, 6,000 MW Renaissance Dam will be the largest hydroelectric power plant in Africa, expanding electricity coverage in Ethiopia and neighboring countries," Veilleux said.
It's also a source of pride for Ethiopians, who are eager to shed the perception of being a famine and donor country rather than an African leader with a middleclass economy, says Veilleux.
"Dams are really big power symbols, not just for their capacity to harness energy, but as symbols of modernity and identity," she said.
Yet, the dam means something else for the 20,000 local people who will be displaced by the project. The vast majority of these are the Gumuz people, a little-studied subsistence culture found mostly along the Blue Nile River in Ethiopia and Sudan. Local Gumuz have important traditional knowledge about the region's natural resources and depend on the Blue Nile River for livelihood and identity. The river is a vital source for water, food, and artisanal gold mining that allows for economic trade with nearby communities.
While the Ethiopian government has a comprehensive resettlement program, Veilleux's research raises many important (and unanswered) questions: What will replace gold as a new source of cash economy? How will farming change without seasonal flooding? Will malaria rates increase with a stagnant reservoir? How will it change the fish and equipment needed to catch them? How will the Gumuz stay connected to other villages when the now-navigable river becomes an expansive lake? Will moving to an urban area lead to increased social problems related to modern life, such as a loss of cultural identity?
She also made an unexpected find that went against prevailing predictions of water wars: Despite the dam's threat to uproot the Gumuz and their subsistence culture, study participants showed flexibility, resolve, and general acceptance.
"I think people had a very keen sense of being river people, meaning they are very adamant about staying near the water because it's their everything, their life. But I was surprised at how flexible they were about moving," she said.

Major: Geography (Ph.D., 2014)
Advisor: Aaron Wolf, Professor of Geography, Environmental Sciences, and Marine Resource Management
Most interesting job: Live sound mixing for the Smithsonian Folklife Festival, Washington DC.
Major accomplishments: Recipient of the Gray Family Fund for Geographers Award, National Security Education Program/Boren Fellow, Visiting Fellow at Central European University, Visiting Fellow at the Hungarian Academy of Sciences, United States Geospatial Intelligence Foundation Scholar, Visiting Scholar at the International Management of Watersheds Institute in Addis Ababa, Visiting Researcher at the Naga House in Vientiane, Laos.
One possible explanation is that the project may benefit the Gumuz in certain respects. "If done correctly, the Ethiopian government can greatly improve some of the challenges that the Gumuz communities face due to malnutrition, disease, or lack of access to secondary or higher education. Resource sharing will also improve the lives of Ethiopians who benefit from expanded electricity," Veilleux said.
But she cautioned that the cultural costs should not be ignored. "More attention needs to be spent on identifying the vulnerabilities and strengths of local communities, to buffer possible threats to these areas, and to make sure that the benefits outweigh the costs."
Using her qualitative data from the Gumuz people, as well as a similar comparison study in Laos on the Xayaburi Dam, Veilleux developed a Human Security Measurement Key that will help identify security vulnerabilities in complex resource-dependent systems. The key provides a platform to compare disparate data sources across multiple geographic and time scales, and has been integrated into theTransboundary Freshwater Dispute Database (TFDD), a comprehensive set of water data that aids in understanding water conflict and cooperation.
Posted by Jennifer No comments:

An interview I conducted with visual artist Karina al Piaro, founder of Fondation Monde Perdu, has been published in the most recent release of Zamaleck Magazine. Karina's work on the Nile River caught my attention in January 2013 when I met her during the Nile Project Aswan Workshop in Aswan, Egypt. At that time, she shared with me her work as well as the story behind her motivation. Earlier this year, we got together to get her words on paper in the interest of her latest exhibition release.

The subjects Karina selects for her work are the riverine peoples of the Nile River in Egypt. She captures their spirits working and playing in the Nile waters with her camera. She has recently released a new collection of her exquisite photography and will be on tour throughout the North Africa and Middle East countries in fall and winter this year.

The magazine is a print publication, but the images are below: 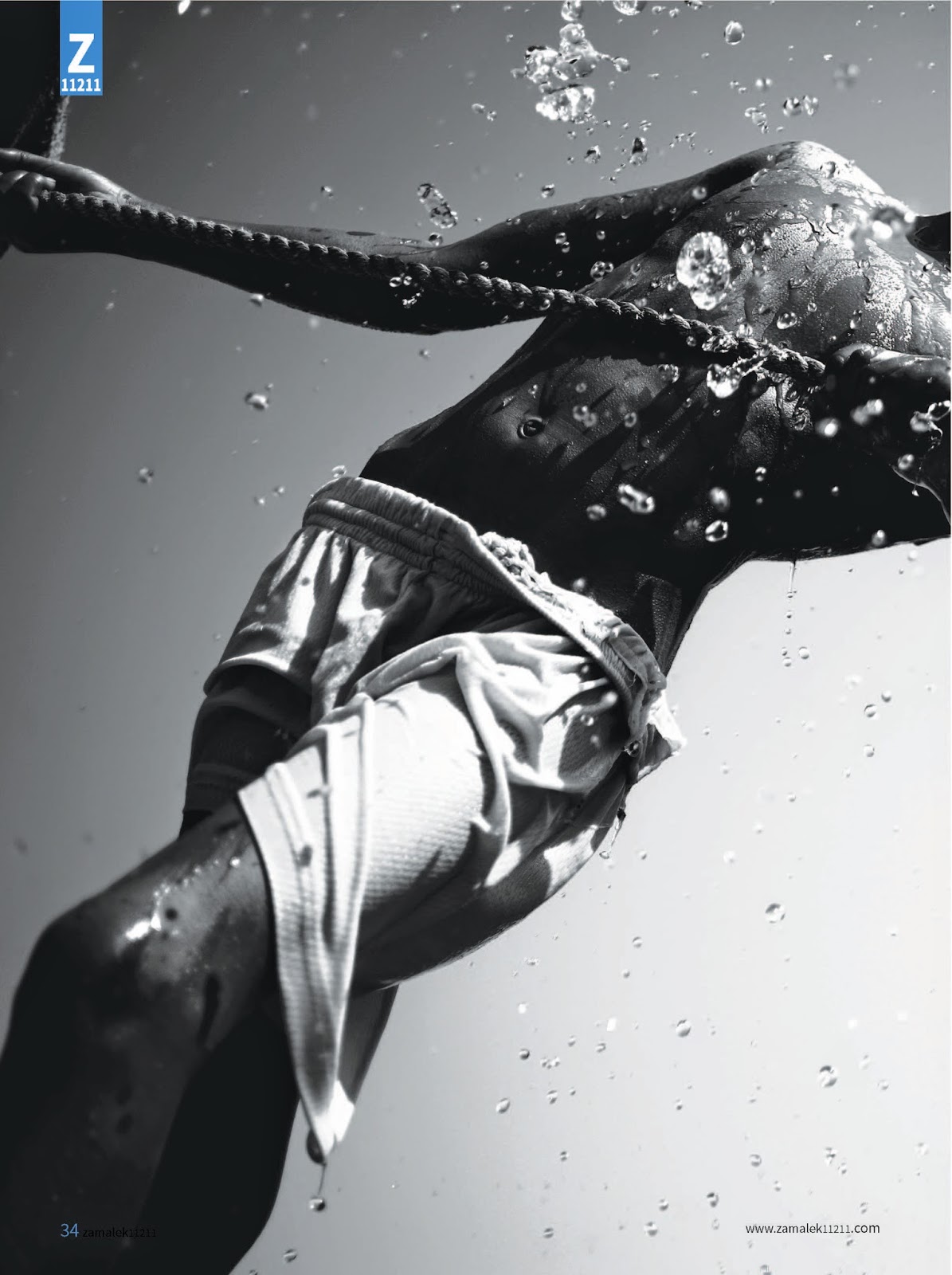 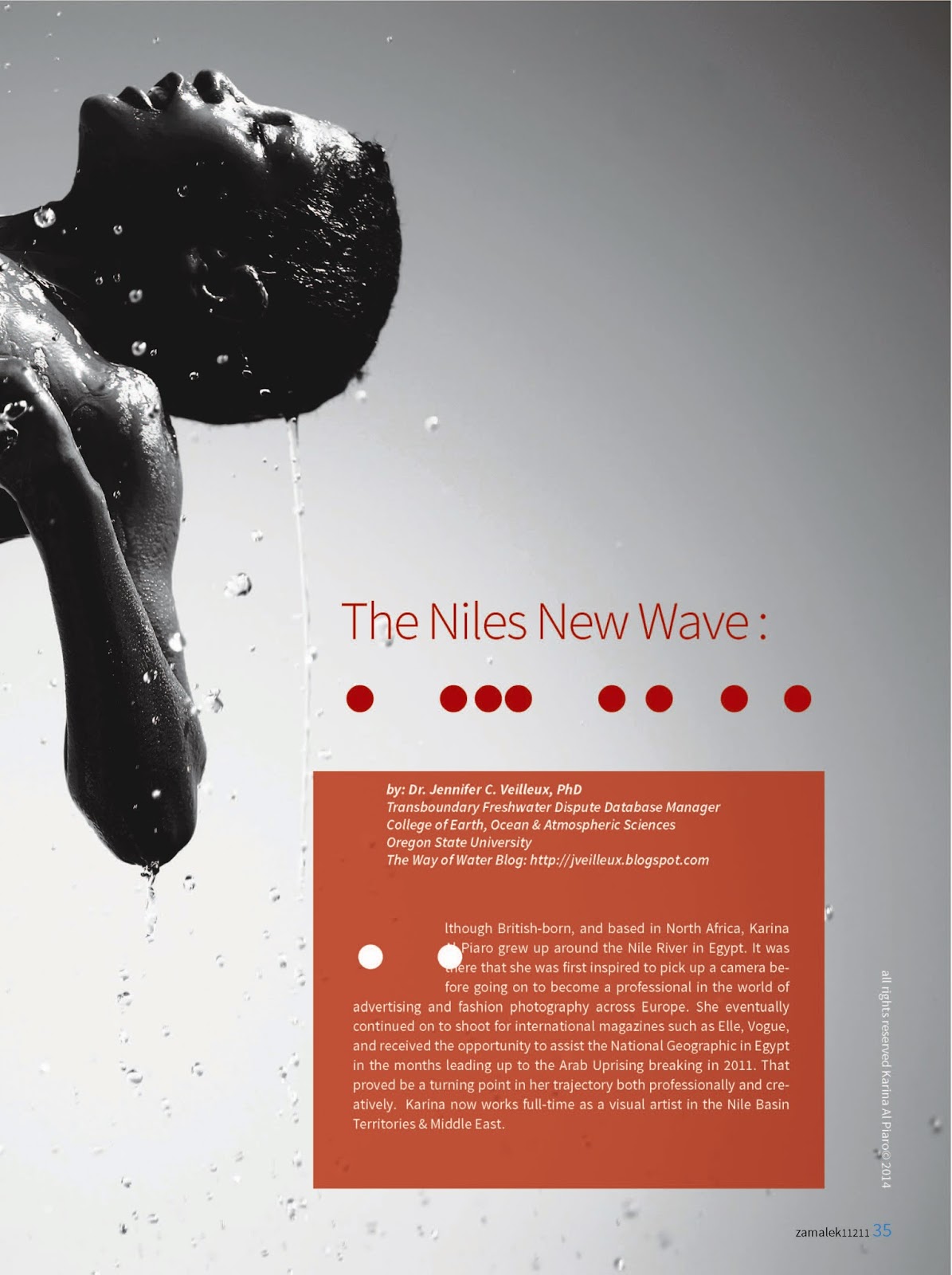 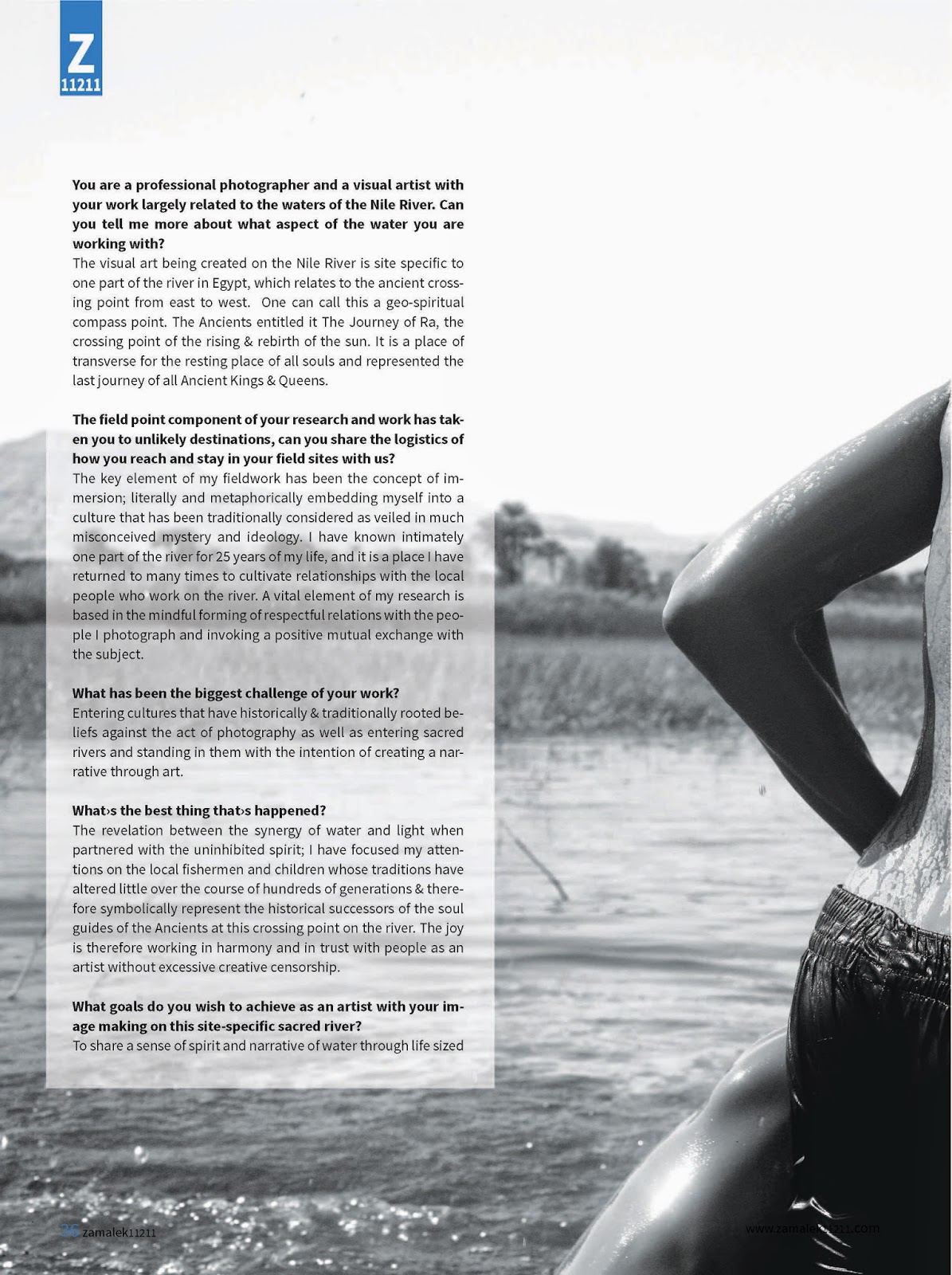 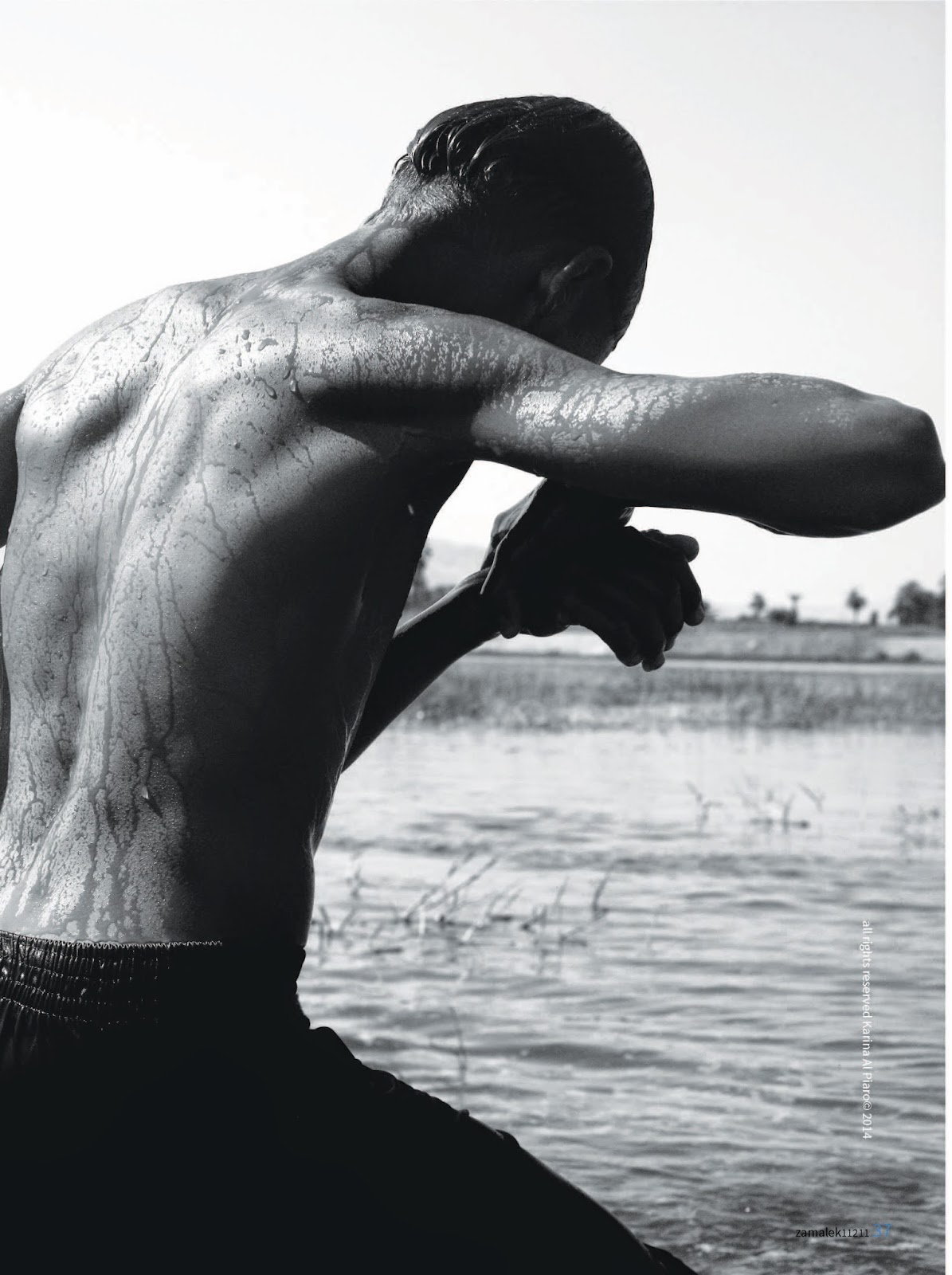 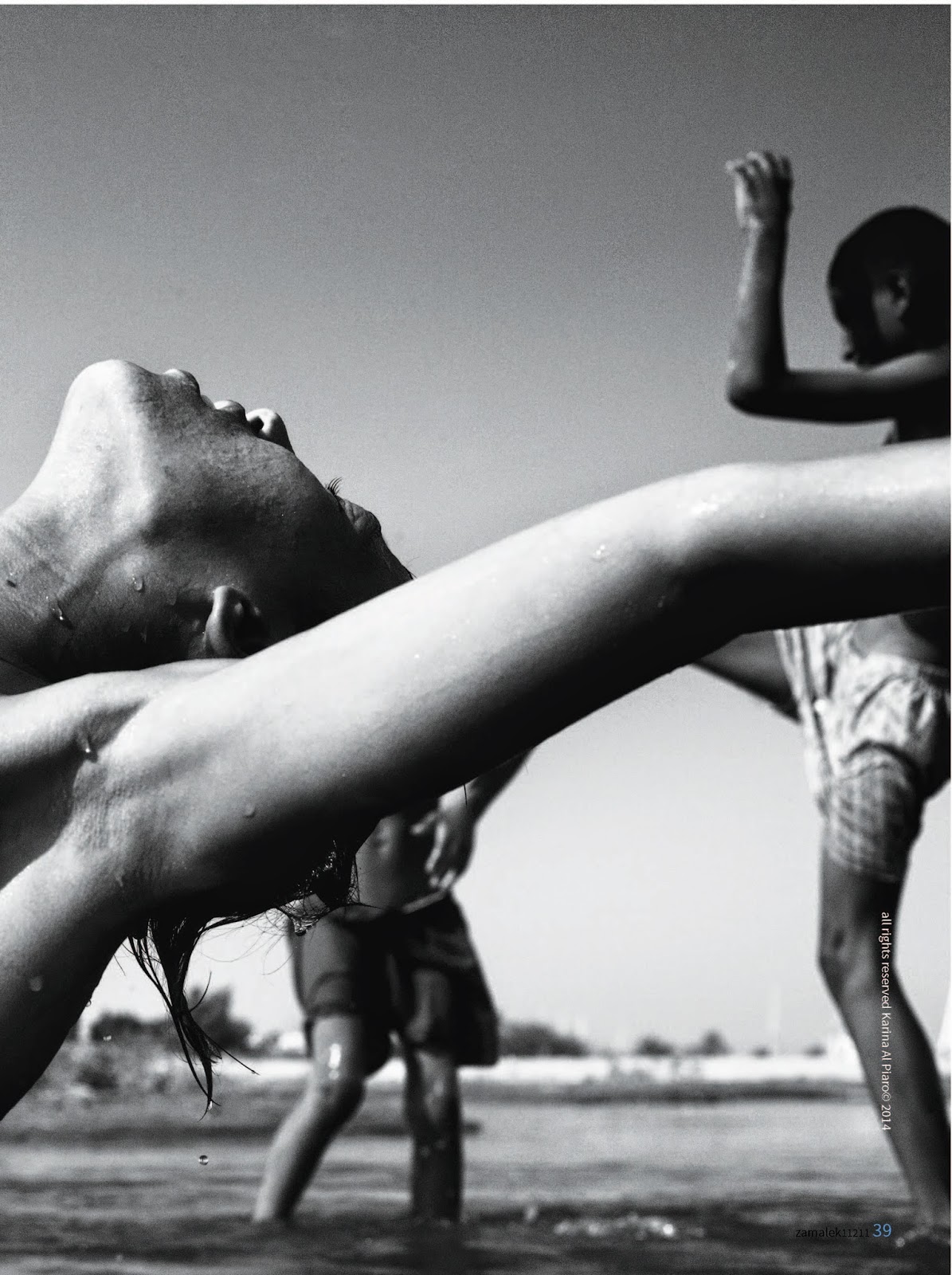