Egyptian Official Follow Up - Do We Believe Reason of Mistaken Broadcast? Need for Mediation?

Here is a link to BBC article talking about the mistake that Egyptian politicians made Monday in releasing a televised meeting to the public and making strong statements about acts of violence in response to Ethiopia's dam project.

There are no innocent parties here - in Ethiopia or Egypt. It is good that the Egyptian leader is making clear that the things said are not the official line, but just discussion. People can overreact - I do. But instead of sending messages like this, when are Egypt and Ethiopia AND Sudan (by the way, in the watershed, not included in the discussions so far) going to sit down and talk about solutions?

The countries need mediation. I don't see it coming from the NBI or World Bank - why not tap the Nile Project? They embody a set of great mediators, facilitators, community leaders, and great creative and scientific minds. I think that they are eager to help promote dialogue rather than political maneuvering.

See the article below: 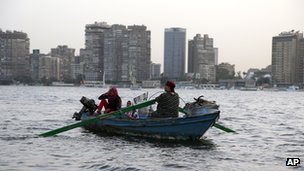 Egyptian politicians are embarrassed after being caught suggesting hostile acts against Ethiopia to stop it from building a dam across the Blue Nile.
They were inadvertently heard on live TV proposing military action at a meeting called by President Mohammed Morsi.
Ethiopia last week started diverting the flow of the river in preparation for the $4.2bn hydroelectric dam.
The Blue Nile is one of two major tributaries of the Nile.
On completion, the Grand Ethiopian Renaissance Dam would be Africa's largest.
It is expected to produce 6,000 megawatts, and its reservoir is scheduled to start filling next year.
Apology
As the participants did not know that the meeting was being aired live by state TV, they spoke their minds unreservedly.
Their suggestions centred around military action as a decisive response to what one of them called a "declaration of war".
One of the politicians suggested sending special forces to destroy the dam; another thought of jet fighters to scare the Ethiopians; and a third called for Egypt to support rebel groups fighting the government in Addis Ababa.
"This could yield results in the diplomatic arena,'' liberal politician and former presidential candidate Ayman Nour told the gathering.
Muhammad Anwar al-Sadat, the leader of the secular Reform and Development party, said the presidency should have warned the participants in advance that the meeting would be broadcast live.
"I am afraid most of the politicians who attended the meeting were not well informed about such a sensitive topic," he told the BBC.
"But the statements made during the meeting do not represent the Egyptian official stance. It was just a chat between politicians who were angered by the Ethiopian plans."
A presidential adviser apologised for failing to warn politicians.
"I am sorry for any unintentional embarrassment," Bakinam al-Sharqawi said in a statement.
Egypt is the most populous country in the Middle East and highly dependent on the water of the world's longest river.
Ethiopia's decision to construct the dam challenges a colonial-era agreement that had given Egypt and Sudan rights to the Nile water, with Egypt taking 55.5 billion cubic metres and Sudan 18.5 billion cubic metres.
That agreement, first signed in 1929, took no account of the eight other nations along the 6,700km (4,160-mile) river and its basin.
Those countries have been agitating for a decade for a more equitable accord.

More on This Story