Have spent a chill week in Germany, catching up with old friends and relaxing. Soaked in the thermal, healing waters of Baden Baden and cruised the middle Rhine River. Water is central to both these destinations and I was happy to note the theme.

Nothing seems more luxurious than bathing, and in the case of Baden Baden, the location was used from the Roman times for just that. For two days I swam and soaked in mineral filled waters of varying temperatures, inhaled perfumed saturated air in the saunas, and by the end of it, developed a cold. Before the illness inflamed my sinuses and caused my eyes to run, we strolled the city and I noted that there are running fountains on many streets and a small river cascades through the center of the town. The water is a central reason for tourists to visit the town.

In the case of the Rhine River, the water serves not only to draw in tourist money, but is finely tuned to serve as a channel of transportation for all manner of things. We stayed in a hotel room overlooking the river and watched as barges traveling low in the water full of petroleum products, john deer tractors, cargo containers, and cars moved slowly up river. These same barges traveled, with flags whipping brightly, back down river with the current much quicker, much higher in the water as they'd unloaded their bounty somewhere offscreen.

Trains moved along the river, on either side. Freight trains flew through one set of tracks, passenger trains on the other. And roads flanked the train tracks, allowing an endless artery of traffic on both sides of the river. Bridges were few and far between, some having been bombed away during World War II and never rebuilt. A ferry system took passengers, cars, and big trucks across the banks for a small fee. Birds of all different types move up and down the river in flocks, or solo. Some are fishing birds, other small and delicate birds must eat the huge amount of insects otherwise attracted to the lights of the hotels and restaurants. Spiders are also plentiful, feasting on the flying prey that swarm in the night. All of this activity is happening at once.

The sound of the barges, trains, and cars making a constant hum that sometimes drowns out the pleasant sound of the rushing waters. I thought about this system, made possible through dams and locks, and channelization. The river has been harnessed to work for human need and want. No doubt there are floods, but the water does not do enough damage to deter this aggressive parade of goods and humans whisked along this highway of convenience. I myself took part in this parade on a riverboat for the day. Our destination was general, we traveled upriver, got out in a small pretty town, hiked to a castle and had a meal on the terrace. I thought as I choked on someone's cigarillo smoke and took in all that was before me from that terrace, that this must be what is desirable - to tame a river to serve a larger human system of economic importance - and to finely tune that river system to move things as quickly and easily as possible. Evident all over the southwestern part of Germany is industry, production, and a healthy economy - despite what has been happening with the global economic markets. The scenery along the Rhine is beautiful, the environment tame. This may be the result of development projects 50-60 years later. I think forward to Ethiopia and wonder how that landscape will differ, how that economy plays out on the ground, and if development projects today will yield similar results 50-60 years from now. 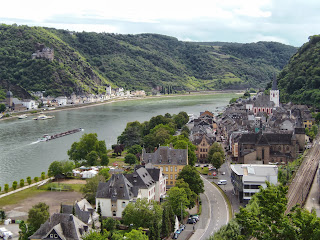