There are many water charity groups set up to do things like provide water purifiers or dig wells. Over the last week, while taking a break from research having left Ethiopia, I have been reading about Western efforts to curb the water sanitation problems in the world. These groups ask for your contribution, they give you back numbers of people served in foreign lands where water does not come out of the tap, but can you trust this information to be evidence of real change? Are these groups making the most appropriate choices for the water problem solution? Are their projects sustainable and do they have quality assurance checks on their projects 1 year, 5 years, 10 years down the road?
I don't know, but I would like to find out.
I thought I'd do some investigating. So over the next few blogs I hope to highlight some NGOs or charity groups working on water-related projects world-wide. The ones that take Western donations and apply them on the ground. I want to get a break-down of how much money goes to the end-user and how much goes toward employing the ideas that these groups have. 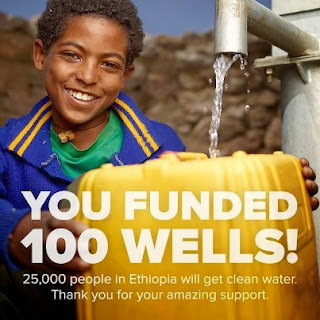 The first is Charity: Water - see ad above. They've even got their own blog. This is a New York City based group that claims 100% public donation to the project. They also take donation to run their enterprise. I wrote to ask how much of their funding goes to what - I am curious to know how much their operating costs are and how much their investment in projects on the ground costs are. I ask this for several reasons.

In Ethiopia, it costs about $100 per day to rent a vehicle. This is without fuel costs, but may include a driver. These costs can run upward of $250 per day or as low as $40 per day - depending on who you know and the type of vehicle. Typical foreign charities are charged the former, not the latter. This charity dug 100 wells in Ethiopia in 2012. They feature a cute Ethiopian boy with a jerry can, collecting water from a spigot.
This charity has made spiffy videos about projects with trendy looking participants. I am curious about this cost break-down - media promotion, private aircraft, office space in NYC, equipment, staff, website upkeep...

I have other questions.

From their website map, the majority of their projects appear to be in the north of the country. The majority of the population of Ethiopia is in the south. While traveling there I saw scores of people taking water from muddy streams and rivers, from puddles on the roads. I am not saying that their efforts are misplaced, because there must be a need in these places that they are working. But, I wonder what the motivation is for their project placement.
How do they measure the efficacy of their projects? How do they know 25,000 people will use their wells? How can they account for the sustainability of the wells? Do they go back to check and is their funding for these updates in the project design?

No, I do not have my own charity to combat these water issues. Yes, I still think someone should be critical about charities and their efforts. I saw many things in Ethiopia that reeked of corruption or mismanagement of funds. I do not think it is malicious intent, necessarily. More ignorance, naiveté, or just oblivious management decisions.

One of my favorite professors at Oregon State University often says in his lectures: "The road to hell is paved with good intentions." This is not his quote but one of Saint Bernard of Clairvaux.