Candice Landry and I were discussing the environmental justice issues surrounding the Stand at Standing Rock. Candice is a geographer who uses demographic and statistical data to highlight environmental justice issues in different US urban centers. Environmental justice looks at where and what portion of our population shoulders burdens related to living in proximity to degraded resources or pollution or contamination. Out of 485 counties in the Missouri River Basin, 48 host population that identifies as Native American and just more than 50% of these counties are either in the path of, or downstream of, the Dakota Access Pipeline.

To start unpacking the question of whether the environmental racism include economic prejudice, we started mapping income and comparing the situation with the Native American households, to that of their non-Native neighbors. We assessed data on households, not on individuals, so these numbers reflect incomes that could support one person, or a whole extended family of people. 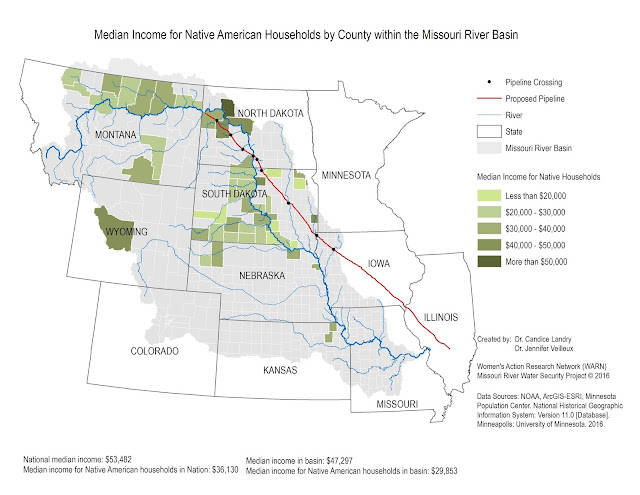 Many pockets of deep poverty—households earning less than $10,000 per year—can be found along the Missouri River and its tributaries, and many of this population living under the poverty level cluster near, or just downstream from, the pipeline route. The US Census reports that poverty level is currently set at households earning under $12K for one person or $24K for a family of four. 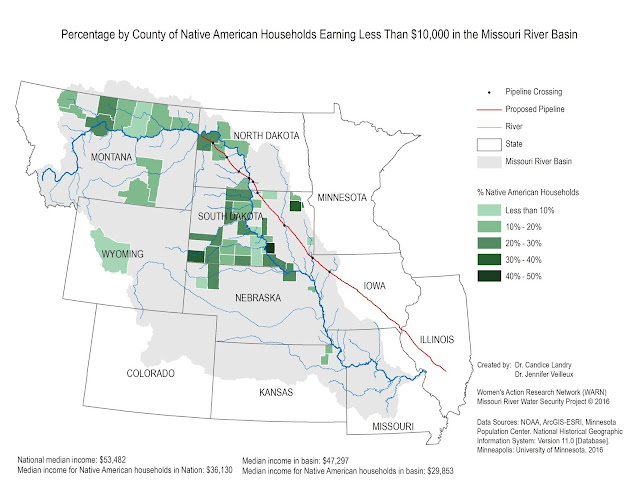 Evidence about the formerly proposed route of the pipeline shows that it was planned to pass just north of Bismarck through the Missouri River. Bismarck, mostly white (Euro-American) population, rejected this proposal due to concern about threats to their water resources from a possible leak in the pipe. So to address the concerns of Bismarck, or rather to avoid addressing them, the company just moved that route to a more agreeable location - where minorities live.

Specifically, where the Indigenous People live - a particularly at risk minority group in the United States that accounts for only 1-2% of the total country population, but who are the original inhabitants of the continent - pre-colonial invasion and occupation.

Since working on this project, conversations I have had with non-Native Americans has been frustratingly uninformed. Most people I speak with believe that the "Indians are rich from those casinos," or "I didn't know there were Native Americans still living up there."  Candice and I discussed how many people in America have no idea about how many minority and economically challenged or poor people live here because they do not leave their socio-economic safety zone. So we decided to start mapping the difference.

These income maps highlight the already economically at-risk communities that the US Federal, State, and local governments along with the Texas-based developing company are putting at further economic, health, cultural, and wellbeing risk with this pipeline.

This four-set comparison map gives a breakdown of the Native American incomes by county throughout the basin from $25K to $10K side by side. 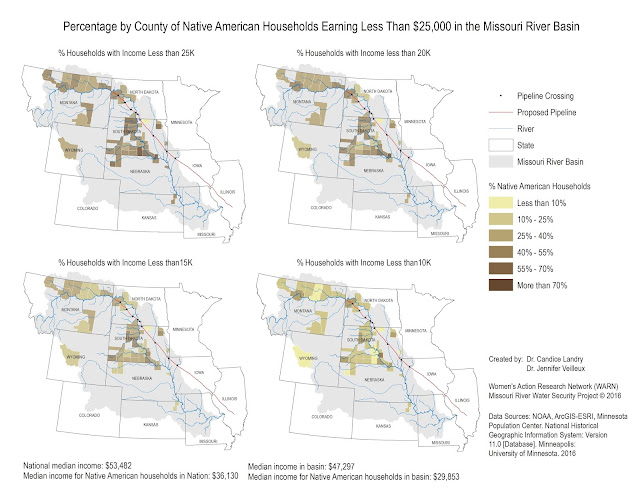 And this final map is a blow-up of the $25,000 and below breakout. If the household is a family of 4 people, all of these households are considered living below the US definition of poverty line on this map. 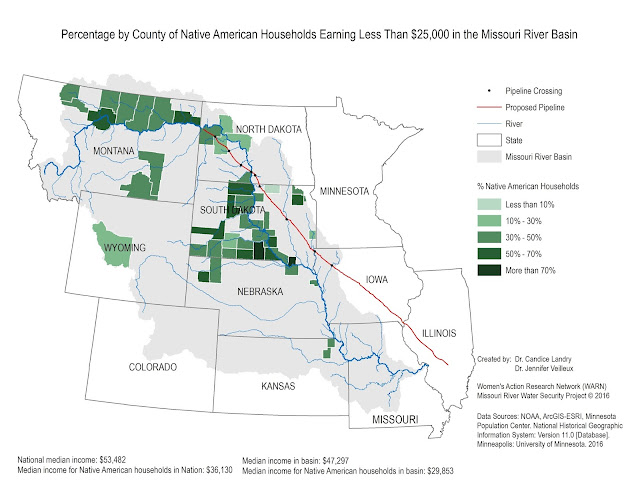