Trip to Sodo, near to Omo River

This is from days passed...trip out of Addis to Sodo last week.

When we arrived in Sodo I was excited as it is perched on a mountainside overlooking more lakes, but it is a city and I was sort of hoping for a town. It turns out that Sodo is the perfect sized place – and if I can make it back there for any duration, I will surely do so. Though the 8 hours it takes there is a bit of a deterrent. The fog was drifting on the mountains surrounding the town and we arrived at the sanctuary of the Friary, a well maintained compound with large blossoming tree in the center, and Italian style design one level monk space. The place was simple and lovely. The resident head Father welcomed me and immediately offered to cook me an egg. This was the first egg I had had in weeks and I was so overjoyed! I immediately took a great liking to this fatherly man with totally peaceful vibe.
I was shown my guest room, which again was simple cot in a clean space with adequate bathroom adjoined. I had enough time to unpack when F. Ayele called to me to tell me that an American doctor had come to see me. Apparently someone called him or he heard there was an American here and came over by motor bike with a local kid. We then commenced to talk about all manner of things, but mostly about his life. What an absolutely amazing man this is! He and his wife came to Ethiopia, specifically to Walayta, to work with women in their retirement – he as a gynecologist, she as a teacher. They had heard that the death in childbirth was 1 in 16 here, for a variety of reasons. Also the rate of females going to school is super low. This has many reasons really, but poverty would be the paramount reason, as I was soon to experience first-hand.

The Father had called for a coffee ceremony. My first. The coffee ceremony is central to much socializing in Ethiopia, especially in the rural areas. They offer an ear of corn, usually grilled, but undercooked, and coffee – the special coffee has butter in it. I was tempted to dip my corn in the coffee. And though I thought I could not finish it, I did out of respect. It reminded me of a time I had mistakenly put salt in my coffee rather than sugar – it was sadly the last bit of coffee in the apartment – and as soon as it touched my tongue I did a spit take. Not this time, luckily. The doctor invited me back to his place on Sunday to meet his wife and after we took a tour of the schools on the premises, he headed home. F. Ayele brought me to an adjoining “slum” neighborhood. He said that this was one of the poorest neighborhoods in Sodo, but there were some people he wanted me to meet. We found a modest home with several unrelated people residing there. A young girl was trying on her graduation uniform, with motorboard. She was graduating in two days. A woman and her young son greeted us. Another woman who appeared to be tough as nails and who works as a mechanic. A boy was called for, he arrived and gave the Father a huge hug. All of these people live together because F. Ayele got them together and then paid the rent for the place. The two teenagers are orphans, the mechanic was also an orphan, and the woman was a cook at the Friary, got pregnant and the guy split. It was touching grouping and everyone was happy and chatting. F. Ayele had worked in this Parish for 6 years, but had been gone the last 2 years working on the Somali border with refugees and orphans, and the US military. The entire time we were in Sodo, it was difficult for us to move far on the road without someone coming to hug him or greet him with smiles and happy tones. F. Ayele also wanted me to see how simply people live – he said yes, you see the green all around, it looks like a rick lush land, but inside there is nothing – the people have nothing. And indeed, this I did see.

We ate dinner in community with a mess of other Brothers and Priests including some very old Italian men who came to Ethiopia decades before as missionary brothers. One in particular was a very funny man who felt like a grandfather, Father Mariano. He convinced me to eat all manner of fruit and food that I had never seen before. Local cheese, ox, local wat, a fruit called bull’s heart: he is the resident mechanic and gardener with thick thick hands always creased with dirt. He also lent us his car to travel with over the days we were there. F. Mariano and I watched the European news in Italian for part and in English for the other half, discussed some politics, had a good laugh and retired. I was so excited to fall asleep to the singing of tree frogs. I was also super excited to sleep inside of my mosquito netting – it felt more like the tent I used to have on my bed when I was kid. I was not super excited to be woken up in the night by howling and agitated barking of the compound dogs. I was terrified imagining that a hyena had made its way into the compound, especially punctuated by the yipping and screaming of one dog and following dead silence. 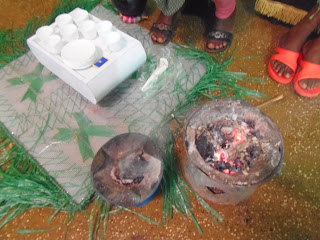 Father Ayele and his self-sponsored graduate 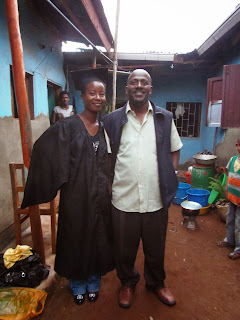 near meles funeral tent in Sodo, foreground is a Bajaj, background are people coming to demonstrate. 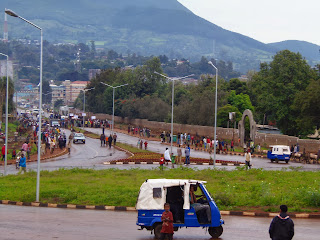 Typical street scene - there will be more to show the life on the street. These kids are helping a donkey pull the heavy load on the cart. 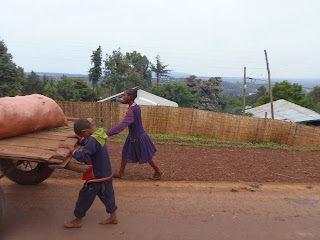