Ethiopian New Year is on September 11th. Leading up to the New Year celebration the mood started to change in Addis. I realized that since I arrived the country has been in mourning. First for the Patriarch, and then for the Prime Minister. This shift in people's spirits was totally uplifting. The radio started playing the upbeat Ethiopian folk music, people were busy buying new clothes or animals at the informal markets around the city, there were more smiles and laughter. It is good to see the Ethiopian people moving past this difficult time. There is still much regret about losing their leader, but you can see things changing. Simultaneously, the weather is changing. We are moving out of the monsoon rainy season into summer and the dry season.

I was living with an Ethiopian family for two weeks, but decided that I needed more time to work on my research than was afforded me at the house. The six hours of tutoring a week agreement changed to many more hours and I could not commit to this given the speed of my data collection and the brief amount of time I am actually in Ethiopia. I have moved again in with a religious community, the Christian Brothers. They teach at and run most of the Catholic schools throughout the country. This time to a wonderful neighborhood of families and activities - it is technically a slum, but this word has such negative connotation. The neighborhood is called Kechene. The houses are made of corrugated iron and there are communal water taps, much like Sister Carol's neighborhood. But there are women washing clothes, dogs and children running around, and constant activity and movement along the street. I love it. People walk up along side me to chat or seek shelter under my umbrella if it is raining, and kids come up to shake my hand. When I first arrived I never took their hand as I was too concerned with germs. Now I always take the hand offered. For one thing, it is important and polite. For another, there is a culture of handwashing in Ethiopia. I have not been in many bathrooms without soap and people wash their hands before any meal as they eat with their hands. The compound is surrounded by a cemetery, and beyond that on one end is a Mosque, the other end an Orthodox church. The calls to prayer compete in the evenings and it is quite a cool sound to listen to. The dogs in our compound howl when this starts up. It is quite the humorous thing. I still continue to see and try to mentally log all manner of different bird species. I wish I had that East African bird field guide I hear so much about.

the house in old airport where I lived with the family 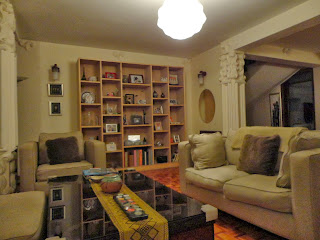 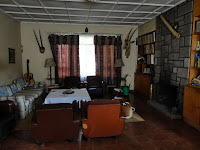 the kids I took care of for two weeks Kelemwork and the New Year breakfast spread - injera is the traditional "bread" seen here in rolls in the basket. 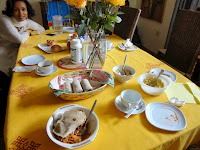 The guard Wolke and driver at the family's house 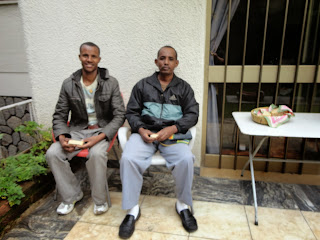 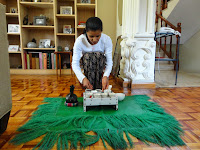 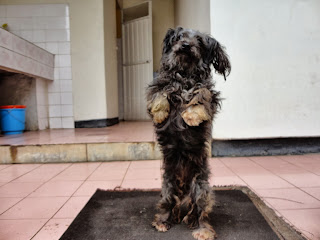 For the New Year there were men standing with flocks of sheep and goats in every muddy empty lot. People led the animals away and brought them home to slaughter. It is tradition here to slaughter an animal to eat for the feast day. Also traditional is on New Year's Eve to build a bonfire. I did this with the kids and working staff in the Ethiopian family's compound. We had special bundled wood, not sure which tree it came from, that we all were meant to put into the bonfire and hold over the flame while singing a song. The song is a call and response and I found it easy to catch on and join the singing. The song was asking if you'd seen the flowers that grow in the spring here - we have been in their "winter", really cold monsoon season. I haven't actually seen these flowers yet, but I am told they grow in this period in and around the city. We lit off two roman candles and then as the fire died down, I was told that we were meant to jump over the flames. This is symbolic of cleansing the previous year and moving fresh into the new one. It felt exhilarating to jump the fire and also good to make this symbolic act and move into a new experience.

lot near to where I lived in Old Airport with small remaining herd on the day of the holiday and remnants pile. this place was full of animals the day before. 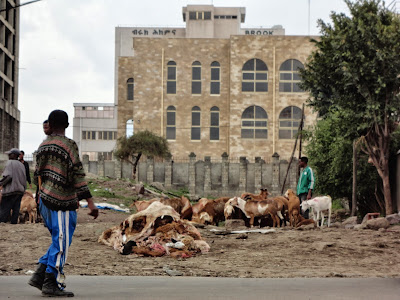 negotiating over the hides 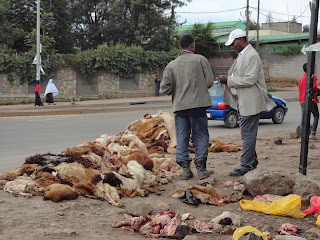 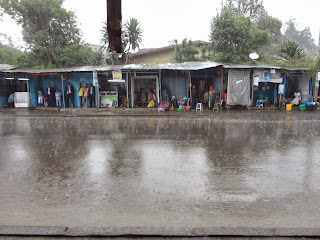 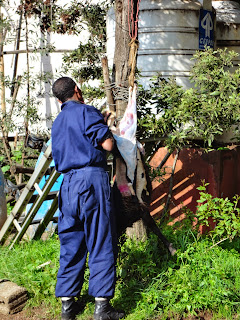 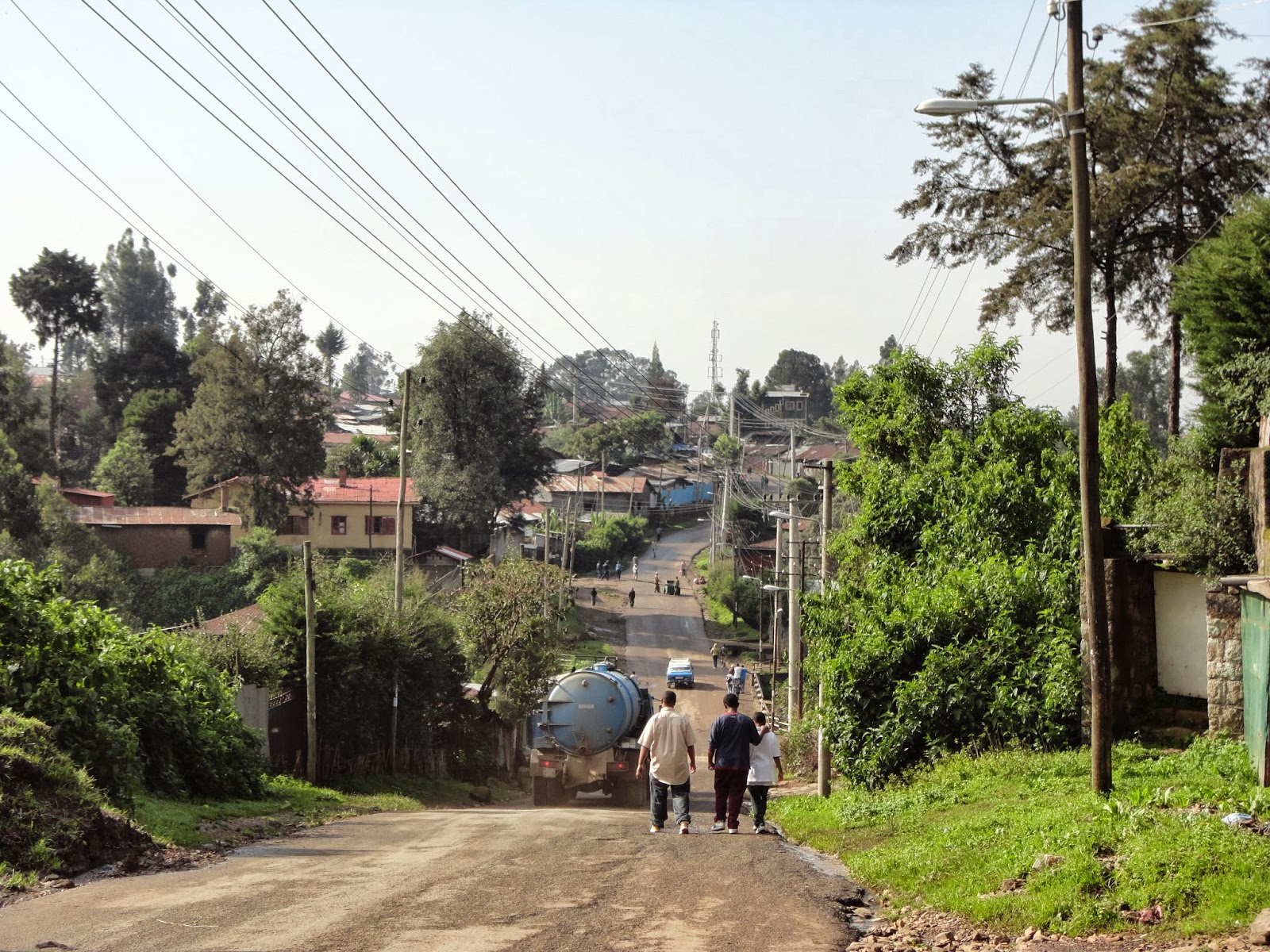 After I watched as the Ethiopians demonstrated traditional dance moves and the daughter competed with modern ones. We all had a good laugh and even Lala, the resident poodle, joined our party. The night before was my first night out in Addis to check out the live music scene. I went with an Ethiopian colleague to a traditional house that is geared toward special events and tourism. The musicians play traditional instruments and there are dancers. I didn't have my camera with me for this, sorry. The people in the hall were dressed to the nines. There are about 80 ethic groups in Ethiopia and the different regions have distinctly different music and dancing. So the performers went through these and the dancers came into the audience to get audience participation. I found myself doing the shoulder dance - you can find this easily on youtube. The movement and beats to some of the Ethiopian music are very exotic for our ears and eyes. In fact some of the movements look otherworldly. Overall it is a very happy and high energy type of music and dancing. After the traditional place we went to one jazz joint that was finished and then to an underground Ethiopian music club. The sound was entirely too loud in this place and I could not hear properly for two days afterward. But Ethiopian reggae may convince me to start listening to reggae again. The club was hosting a singing competition. Three different performers cycled with the band and all the Ethiopian men were on their feet dancing traditional dances. Again, this music, though electrified and accompanied with bass guitar, had particular regional origins and there are corresponding dances. In Ethiopia, the dance scene is just the opposite of the States. Groups of men get up and dance together and the women hang back. When I could stand it no longer, I got up to dance and to my relief, a group of Ethiopian women from the next table got up to dance as well. It felt great to be out and dancing and happy.

A typical day in Addis includes the line taxis. These are minibuses that are almost all falling apart. They are painted blue and white, as are the private taxis, but cost only 2 birr rather than 80 birr to get across town. There is 17 birr to $1.00. There are boys who call out the destination of the taxi and you find them clustered in groups in certain areas of the city. Usually you can stand on the street of a given line and hail one down. They pack these things to the gills and people will sit on the sideboards and wooden benches improvised alongside the proper seats. These felt very novel when I first started to take them, but now to me they are just essential for travel around Addis. The offices I visit are usually very far apart. During the holiday people were even transporting tied up sheep and chickens either in the back or just at our feet.

Yesterday morning I woke up to the bleating of a sheep in our yard. One of the guard then sat in front of this sheep as it was eating to sharpen his knife. I had to leave the compound for a meeting, but in order to do so, I had to pass the slaughter. I tried to get out before it happened, but I was too late and then had to wait as the animal struggled with its throat slit on the ground. It all happened very quickly, and when the man had tied the animal upsidedown to the tree, I was able to pass by without feeling squeemish. I just don't like to watch anything die. Last night the sheep was served for dinner, and though I really wanted to eat it as I love fresh meat, I couldn't bring myself to. I hope I get over this feeling, it seems a bit silly.

I have completed the first phase of my research in Addis. In my next post I will speak more about this and what comes next. I am about to travel again and may be traveling and in the field for the rest of my time in Ethiopia. I cannot believe how quickly the time has gone!
Posted by Jennifer