I have created maps of the Nile River Basins's Human Development and Human Security rankings for inclusion in my dissertation. These are drafts. I used the Human Development Index (HDI) and the new Human Security Index. The HDI is a ranking based on lifetime expectancy at birth, GDP - or some modification of it - well debated in the literature, and literacy. The HSI is based on the HDI with expansion of what they call social fabric index - parameters that use a dozen or so other indices rankings to expand the social and environmental inputs. One important caveat to note is that these maps were produced on 2009 index data, obviously taken from before the Egyptian revolution and before South Sudan existed. To describe the Nile basin, this map displays each country's rank by color from greenish - more secure - to red - less secure. The country's ranks are displayed only within the confines of where the Nile basin comes within the territory borders. The numbers used for the Index are a ranking from 0-1 scale and as you approach 1, you are in a better development or security state. Though the UN’s Human Development Index is well-known for a quick glimpse of a region’s development “health” based on the 3 previously mentioned parameters: GDP, life expectancy, and literacy, Index comes under fire because it is simplified and culturally bias. It is still a useful tool to examine a macro-scale snapshot of a region or a country. However, as a stand alone evaluation, I do not think HDI should be used to assess investment opportunities (as it no doubt is most often used by World Bank and friends) or measurement to get an idea of potential conflict due to pressure, such as a dam. Although the HDI changed how economics are measured in 2010, it is unimportant to discuss here. The HSI as mentioned above, includes more parameters to reflect a sustainable model of economic, social, and environmental. The details of what the HSI  measures are better explained on their site.

What becomes immediately clear from these maps is that Egypt is in a different rank than upstream basin neighbors, by a healthy margin. According to the HDI, Ethiopia scores the lowest of the all the basin countries, at a ranking of 0.4. Egypt scores the highest at 0.688. Comparatively, the HSI shows Ethiopia as ranking higher at 0.415 than Sudan at 0.392, with Democratic Republic of the Congo ranking the lowest. The different numbers are due to the parameter inputs, as explained on the HSI pages. 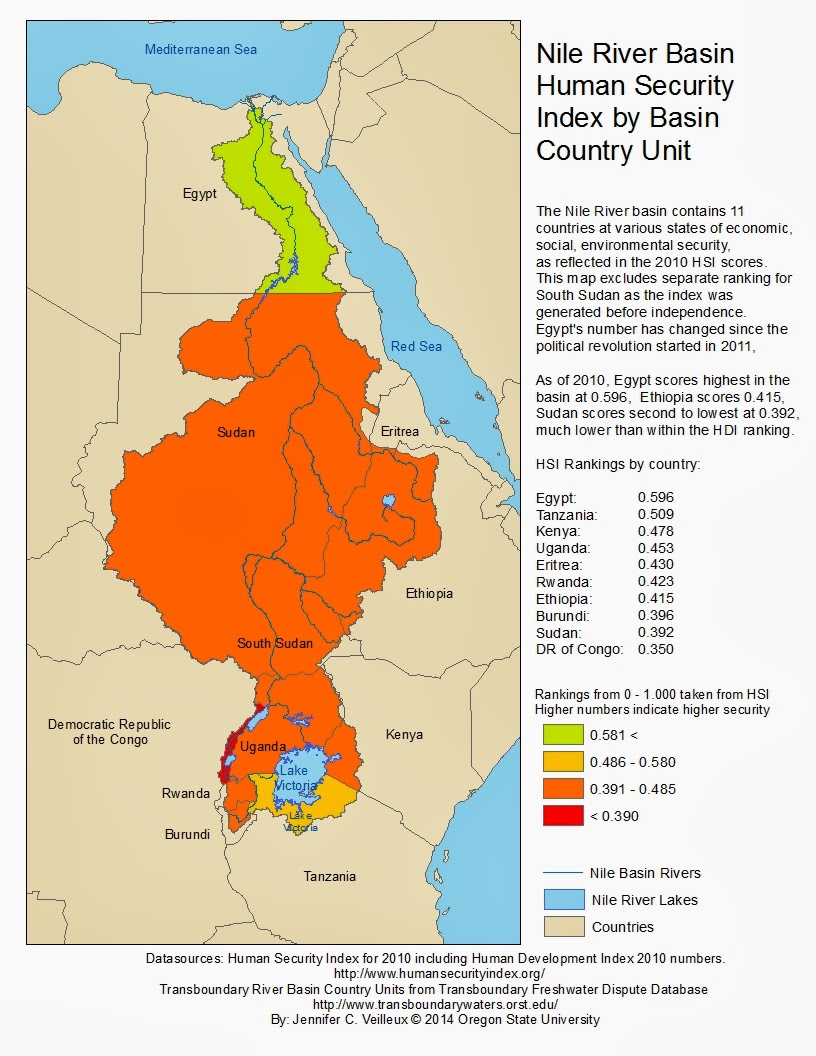 This is important when we come to the discussion of Egypt's opposition of not only Ethiopia's dam, but of general water development projects in upstream countries - standing on the colonial and revamped treaties and historic water rights. Egypt has traditionally looked outward - away from the African continent and has a clear and independent identity from history and politics. I have met Egyptians who identify as being African and would like Egypt to step into that identity more confidently. That things are changing almost daily in Egyptian politics and in Nile development means that Egypt is going to have to take notice of upstream neighbors. The region's development should be, and is I imagine, an important consideration for Egypt. The more stable the upstream neighbors, the more likely they are to develop, and use the Nile waters. Also, though, the more stable the upstream neighbors the more markets for trade, the more availability for an electricity network expansion, the more cooperation on managing Nile waters to Egypt's benefit - could the water be managed in such a way that there is less evaporation in the basin? Right now the numbers touted are in excess of 85%. There is room for improvement when it comes to water management in the Nile, and that Egypt's upstream neighbors beyond Sudan are positioning themselves to have these discussions and capabilities, bodes well for future cooperation and successful futures for the countries involved. At an international scale, the Renaissance not only makes sense, but appears inevitable.
If you would like higher resolution versions of these maps, please contact me directly.
Posted by Jennifer