Journey south part 1 with many photos

I decided to take a break from hectic Addis and travel south to Sodo again, to have some peace and process my data. I traveled via Bale National Park where two Peace Corps Volunteers live who invited me to visit. Bale is an alpine region and there are several endemic species of mammals and birds present in the park. I decided to take them up on their offer and see some Ethiopian wildlife.

Traveling on a budget is not the easiest thing in Ethiopia. There are travel options for high budget travelers, and then there is traveling with the masses in Ethiopia in cryptic, unregulated, and probably unsafe ways. I have been avoiding long distance with the super fast minibuses because I have seen a few nasty looking wrecks, and because their reputation says much the same. So, an alternative are large buses. Unfortunately, Bale is not accessible on either of the two newer, nicer long distance bus lines from Addis. I needed to find the Central Bus Station, a huge but allusive place near the infamous Merkato - Africa's largest open air marketplace - and book a ticket a day in advance on a local "first class" bus. Merkato is infamous for the characters it attracts. You are most likely to get pick-pocketed there of anyplace in Addis if you aren't careful, or have a rat thrown at you, as I did on one occasion (I chased down the boys to scold them with the help of some local Ethiopian men and they did the scolding). An Ethiopian friend brought me with his car, but even he had a hard time finding the place. It has no sign, nor any signs leading up to it. Once we found it, the Central Bus Station consists of two huge dirt parking lots where you embark and disembark the buses, and it has a row of outdoor ticket windows. The place is full of hawkers - mastika (gum), soft (tissue), highland (water), kola (a toasted grain snack), etc. and brokers - guys who want to help you with your bags, travelers (poor Ethiopians strapped with kids, bags of clothes, food, live animals), and street kids looking to cause trouble. The street traffic in this area is helacious - there are tons of people carting things from the Merkato, buses and people and taxis and carts and kids and dogs and goats and sheep all over the place, spilling off of the sidewalks, standing about in the driveways.

We somehow found the bus station parking lot across from the ticket windows where we parked and walked across the street to brave the chaos. At the ticket window where there are signs, they are written only in Amharic script and there is no way to know what is what without the help of someone - and there are always someones nearby who are ready to make some birr to help. I braced myself for the hassle, and felt a huge wave of relief. Actually purchasing the $7 ticket was quick and easy, just arriving at and leaving the bus station are time consuming. The ticket said that the bus left at 5:30am, the sellers were happy and smiling, the broker who helped was happy and smiling, I was happy and smiling too.

The following morning I took a taxi to the station and Rayed, the driver, helped me to find the bus and to find my super tight seat. I then sat, waiting for departure, for the next hour and a half. I tried unsuccessfully to sleep. Buses do not move in Ethiopia unless they are full. This one slowly filled with an all Muslim cast, the men and women looking markedly different than the Muslims in my study site, or the Christians in Sodo. The diversity in this country still astounds me, though I am getting used to some ethnic traits and can loosely identify the origin of someone I am speaking with (north, south, etc.). As the bus got moving after sunrise, and we left Addis, my spirits were encouraged by the sunshine, camels, Rift Valley landscapes, and green green expanses. The woman sitting next to me who was vying for shoulder space with me in the beginning, fell asleep tucked up on my shoulder. Shoulder room is premium on these buses. Leg room, forget about it. One woman I know here commented that taking the bus is like hours of one yoga position, because you have to pretzel up just to fit. You just accept that you will overlap with your seat-mate. I saw men sleeping on one another's backs, and other seat mates in various positions of snuggly bus riding nature. People also share out their food. I brought a bag of cookies, which I gave out. Other people had kolo.

We stopped for breakfast somewhere and I had a traditional coffee. I love the coffee here. I have watched the method of preparation and hope to be able to replicate this back in the States. The result reminds me of Turkish coffee, but it is hard to compare with the level of freshness when the beans are roasted and ground moments before they are steeped. My good friend's new wife requested Ethiopia for their honeymoon specifically because of her love of coffee culture. At this stop fellow passengers began speaking with me. Speaking is a loose term when I use it in most contexts. Most Ethiopians in the rural areas speak some English words, but do not speak fluently. In fact, most of my conversations have elements of complete confusion as to meaning or context. But, through body language, my very few Amharic words, their attempts at English words, and good natures, we communicate. A young guy asked me over to join his breakfast and told me he is a plumber heading to a job for the week. 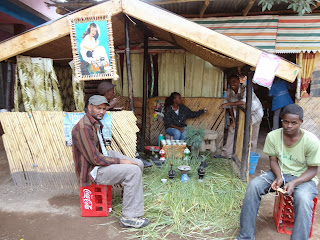 traditional coffee shop we stopped at with the bus

When we got back on the bus, this guy, who I had noticed getting on the bus because he was so nervous about his tool kit, was sitting behind me. He also sang a lot. I asked him the names of some of the Ethiopian singers we were listening to on the ride. Some of the music was really good. We got into a short conversation and I noticed that all of the fellow passengers nearby were leaning in with expectation as we spoke. When our eyes met they gave big smiles. I find this a touching thing in Ethiopia. People love to socialize and are very happy when you are included. Sometimes this can be a bit maddening though. I was craning my neck around to speak with the young man, and when it was starting to hurt I sat facing straight forward again. His English increasingly decayed to Amharic-English words that were indecipherable, and he went back to singing, and I went to sleep. Some time later when I woke up again, he started speaking to me immediately. When I was somewhat unresponsive, he insisted "Jenif, talk with me!" or "give me your number" or "give me a camera, I will make a picture." Although I know he meant well, I know he was bored on this bus and wanted to be entertained. I was so tired I could not oblige. I was also astounded by the new scenery out the window.

While I slept we ascended into the alpine region of Bale. This landscape is unlike anything I had yet witnessed in Ethiopia and is like any alpine place, just beautiful. The valleys plunge into lush green rivers below and the mountains reach up to craggy peaks above. There is no guard rail on the road and you can see clear down the ravines. We also started to see some other things... 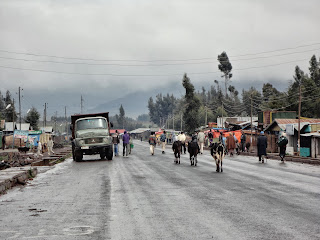 After the singer got off and before we got to Dinsho, we passed through the Gaysay plane. The first thing we saw were warthogs, just grazing away, and then herds of antelope type animals called Nyala. Finally we came upon a whole family of baboons, and I must say that this particular creature just weirds me out - even from the bus window, when I met the eyes of one baboon messing about in a puddle of water, I was put off. There were a mess of them hanging out on a transformer tower as well. Birds were darting about everywhere and the sun lit up the entire breathtaking scene. When the bus pulled over to let me off, I was standing in the middle of a small mountain town, typical of mountain towns I have seen in other places. Stray dogs trot about with thick shaggy coats and happy expressions, the streets look mean and muddy, the people look shaggy too, in dark colors and thick sweaters, the houses sag and smoke rises from cookfires then hangs in the air like a memory. 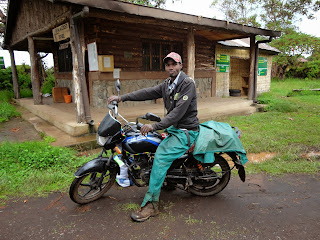 I got a park pass (Bale National Park), checked in at the lodge, was brought to town on a motorbike for a lunch that cost 17 birr (less than $1), then went back into the park for some solo trekking in the waning sunshine of the afternoon. It was funny that when I arrived at the lodge with my two bags, out of breath - this is about 10,000 feet, some German man was there and asked me where my porter was! Despite the altitude slowing me down, I spent 3 hours hiking that day, I saw many animals, met a group of retired white South Africans who were making an overland trip from Cape Town to Khartoum and back again, got lost in the woods when I chased some warthogs, butterflies, followed a pair of bushbacks, found cool flowers, and a great tree to climb. Found my bearings again just as the sun set, went for a lovely dinner of tibs (meat dish), then went to a local bar where I laughed my head off at a local gnarly guide's series of stories about eccentric and crazy tourists from Europe. Dinsho was making me fall in love with Ethiopia all over again. To top everything off, my bed, I was alone in a room with 3 beds and thus 3 sets of warm blankets, was the absolute most comfortable bed I have slept in in Ethiopia. 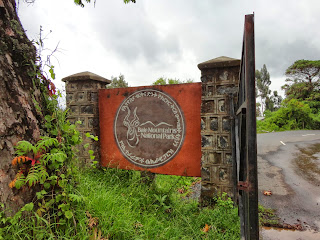 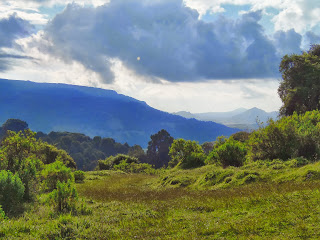 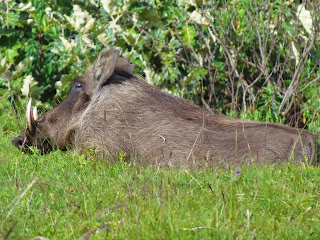 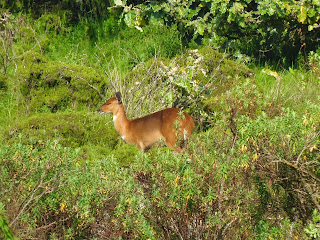 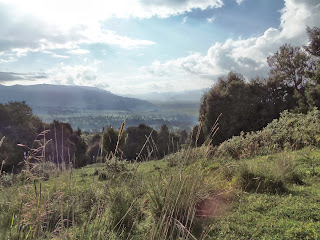 lost in the woods 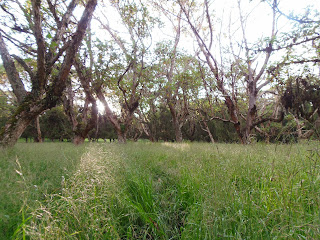 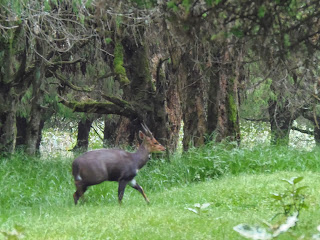 sunset back on the trail 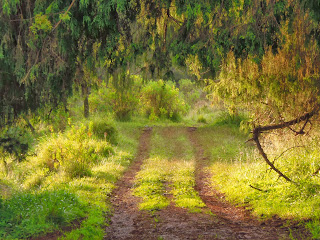 edge of the park 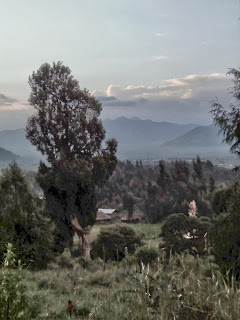 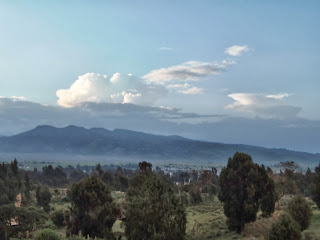 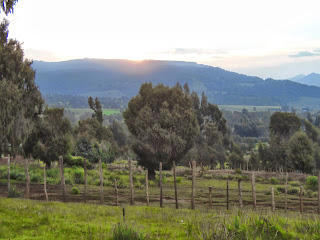 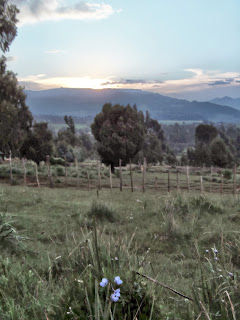