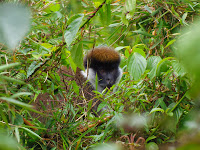 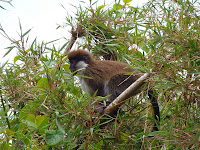 Time in Bale was refreshing and renewing. Tracy, Ramona, and I spent more time tromping around the forest. Tracy tracked down the Bale Monkey and we watched them and a troop of Colobus Monkeys do their thing. The Bale Monkey was hiding in the bamboo, eating the leaves and socializing. They told me that on a previous sighting the monkeys were dancing in circles holding hands on the ground. They are the cutest monkeys, with little white mustaches. Honestly, I do not really like primates, but these guys are an exception. I was so happy we located them and I had this magical time to watch them in their natural environment. They are extremely shy. Their tales are not prehensile - like in the New World monkeys. They chat a bit with one another, they groom each other, mostly they were just eating and eyeing me suspiciously. (More monkey photos at the end of the post) 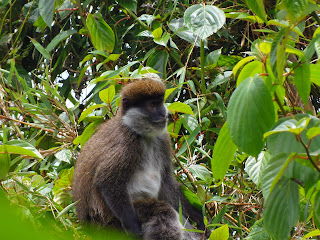 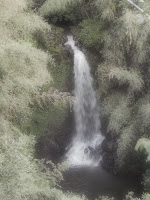 We hiked to more waterfalls and views, and the way was again steep, but this time wet and slippery. We all took spills along the way. We hiked to a waterfall series, one above the next, and then out to a cliff edge to look at another part of the valley. We breathed the fresh air, socialized with the neighbors, and retired to more cribbage. We could hear the hyenas howling and yelling in the night. Tracy told me about hyenas, that even the females have male organs and it is extremely difficult for them to mate. They also told me that there are hybrid Ethiopian wolf/jackal or Ethiopian wolf/dog offspring. When the park officials see these animals they sterilize them so that they cannot keep interbreeding and change the species. But, apparently, some of these offspring live a whole lot longer than the wolves. Perhaps the interbreeding allows for a stronger stock.

The morning came when I had to leave and though we went out to the road early, it took ages to catch a ride. We managed to flag down an Isuzu - this is the general name for all lorry type trucks here - and the driver gave us a ride in the cab. We stopped for their breakfast. Ramona and Tracy went to sit in the house with the kitchen, but the smoke was so strong my eyes started streaming and I just couldn't remain. The restaurant served us tea. I tried two times to go back in to join them. Finally I gave up and the truck driver and his assistant asked me to join them and share their breakfast. It was a bowl of barley mash with butter in the middle. It was warm and delicious, but I was careful not to eat too much as they probably needed the breakfast brick in their bellies more than I did.

Many trucks had passed by day before toward Dela Mena. We expected many empty ones to travel back along the road this morning, but it seemed they either came earlier or would travel later. We were the only ones out. Some of the trucks come from the border of Kenya with goods to be sold illegally in Addis. Illegal because they haven't had import taxes paid on the goods. And they are typically overloaded. My friend Afework says they are called Al Qaeda, the trucks, because the drivers are reckless and are the cause for most of the accidents on the roads in Ethiopia. My friend Jason explained to me today how he watched one being pulled from the Blue Nile Gorge this past weekend. Our particular ride was LOADED with sesame seeds. So much so that we absolutely crawled up the mountain to the plateau. I felt a sort of sad goodbye in my heart as we left the valley, the forest, the peace of the park.

Up on the plateau we were totally crammed, legs piled on one another as the cab for two fit four of us. Everyone seemed to chat amiably and Tracy pointed out all the little rodents running around below us. These are mainly the big headed mole rat, or giant mole rat. These guys are pretty cute and funny looking with their eyes up on top of their heads. They live underground so this makes sense. They are also the main source of prey for the Ethiopian wolf. And then we spotted them. One, in the distance, trotting along. The driver of the truck slowed down. There were more wolves out the other side of the road. About four of them all together, running across the plateau. Admittedly, they were far enough away, and we were driving, so I did not ask to take a photo. But, I feel privileged to have seen them at all. There are only about 500 of them left in Ethiopia - most in Bale, a few in the Simien Mountain area I think. 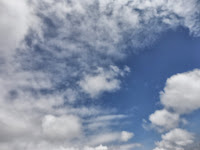 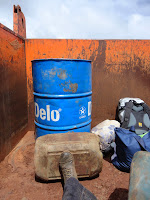 We also stopped to speak with the Frankfurt Zoological Society Director who was bringing around a guy from IUCN to check out the park for recommendation to the UNESCO World Heritage Sites. I really hope they decide to include it. What a miraculous and far-flung place. The plants, these large palm looking trees, dot the landscape. Also endemic. Also very strange looking out there like Joshua trees in California. Then there was a huge BANG! right under my leg. The radiator blew. Too much strain on the engine from the overloaded truck I suspect, and from the bouncing about on the bad road and fording rivers. We jumped out. The radiator was leaking fast. These poor men. How would they ever get a mechanic out here in the middle of nowhere. But immediately there was another truck and we could not stay out there in the middle of nowhere to find out. We hopped in the back and were on our way. 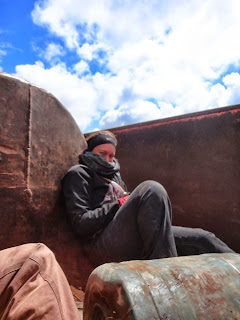 If there is an exhilarating way to travel through beautiful landscapes, it is to travel in the back bed of a huge truck. You are up super high to see out forever, but you are also outside in the fresh cold crisp air with the huge sky above. It was very cold on the plateau, but as we descended on the other side, I stood up to take it all in. The truck slowed down and an Ethiopian man got in the join us. I watched as baboons hung out, as people carried things on their heads, as children waved. At some point though I had to sit down again as travel like this is not permitted by the highway patrol. We were wedged against oil barrels on a pile of dirt - to ensure the barrels didn't roll. One point where we stopped at a checkpoint a customs official popped his head up over the side. You have to climb up the massive tires and then the ladder to get in. He just laughed at the ferenghis piled in the back. We got off in Goba and went directly to eat. Eventually though, I said my goodbyes and departed for Sodo on a Level 1 bus. I wont go on again about travel on the buses in Ethiopia. But, at least with this bus, although slow, was a safer option as I saw just a bit down the treacherous road one of the minivans flipped over. I also got to try the Dinsho kolo again. The best kolo in all Ethiopia - it is some sort of grain, roasted and salted. It is usually shared out on the bus.

I had been speaking with Tracy about the fact that I missed laughing on this trip, that I felt I didn't laugh enough with people. He said that he laughed all the time with his Ethiopian counterparts. I was determined then to start laughing in Ethiopia. On this bus ride, I had the two guys next to me in such stitches that I was shocked I could be so funny. We had a great ride together and somehow in that moment I unlocked some key to Ethiopian humor, and my own. I am so happy about this. I have been laughing a lot ever since. 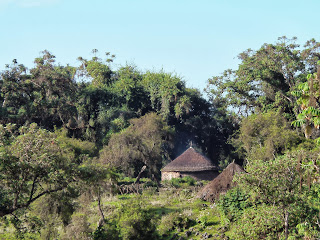 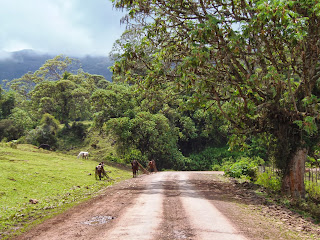 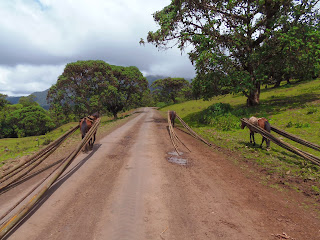 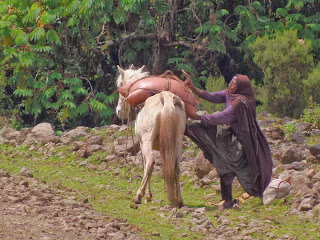 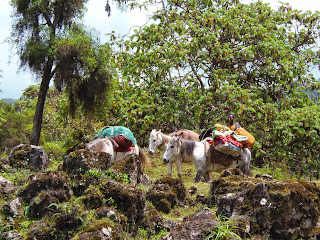 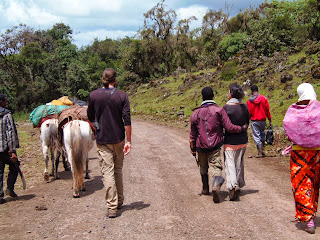 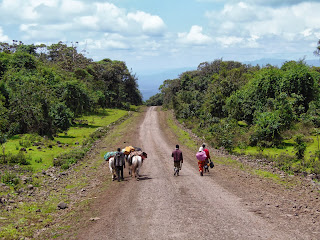 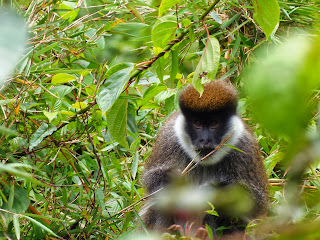 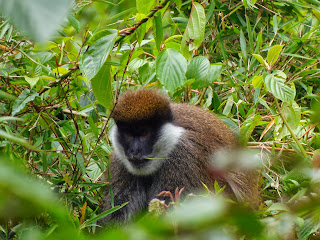 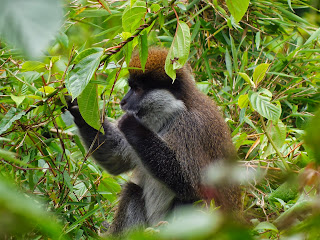 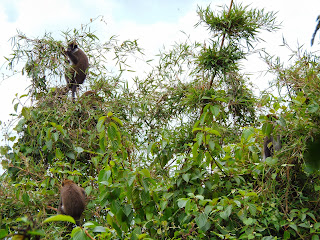 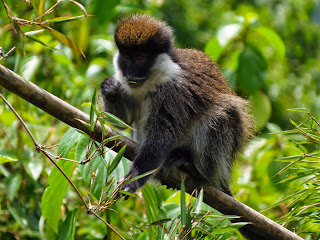 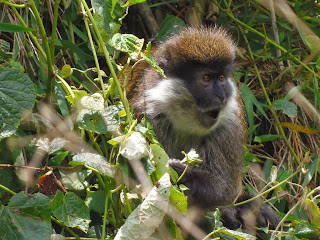 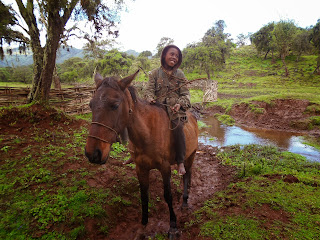 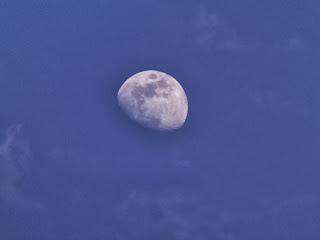 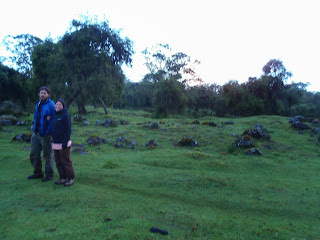 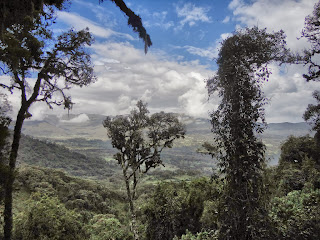 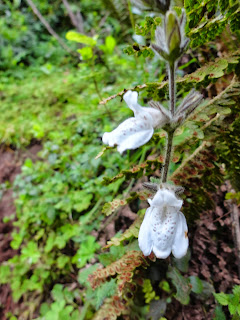 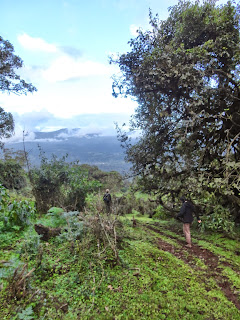 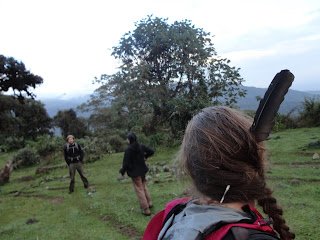 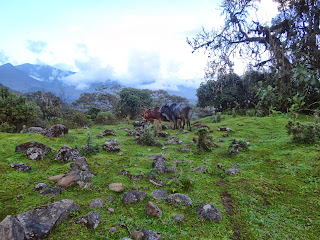 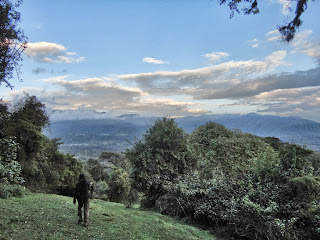