After spending some days processing my interviews, I left Addis again, this time to the north. I was very excited as my good friend Rob and Syndey had come to Ethiopia on honeymoon. They invited me to join them for a day or two, a meal, a conversation, and I agreed to meet them in Lalibela. It makes me extremely happy to see friends, especially in different towns/cities/countries, and definitely after so much time passes, as it tends to do as we get older. I had not seen this pair in two years. I lived with them years ago while I was finishing up my Master's degree in Connecticut. 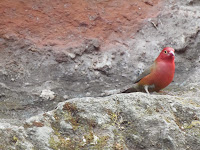 I met a man named Richard on the shuttle bus to the plane in Addis. He had just come in from 2 month work in Kenya. He works for the BBC. Immediately I could tell he was a lovely man and our conversation continued as our shuttle bus pulled up to the plane, did not let us out, returned to the terminal, shuffled us up one flight of stairs to our original gate, then down the hall and back down the stairs of another gate, back onto the shuttle bus, and the second time they let us off at the plane. Why? We never found out. 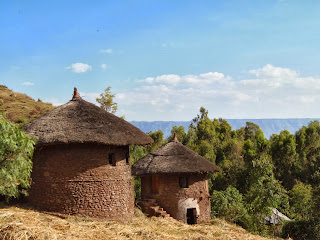 As we discussed Africa and life we decided to meet for dinner at a restaurant I had heard of from Lori Blumenthal, who works at Powell's bookstore in Portland, OR. I was in buying books on Ethiopia and she pulled me over to her computer to show me photos of this place. It is called Ben Abeba, quite new, owned and run by a Scottish woman and her Ethiopian partner. She made me promise to go there if I made it to Ethiopia. I did. We agreed for a time and I gave him my digits.
We pulled in for a landing in Lalibela and I strained to see any sign of a town. It was just mountains, terraced, agriculture, some forest, more mountains. The landscape is incredible. This is the Ethiopian highlands defined. Tabletop mesas and steep eroded valleys. It is breathtaking. We disembarked on the tarmac, not more than 25 people on the plane, and picked up our luggage from a cart on the tarmac. Richard met with his guide, said goodbye, and I waited for my friend's flight in from another town. It wasn't long in coming. And there they were - so surreal!
We all took off to their hotel - a beautiful place situated on the edge of a tabletop, overlooking the entire valley below. The town has a weird sprawl - it is in the mountains above the airport, but there are like three huddled concentrations and the entire place spans a fairly large area, for such a small population (maybe 20,000?). I had booked at a cheap guest house, but their guide, Afework, asked if I could stay for a reasonable price at the place he was staying, just up the road from Syndey and Rob's hotel. He said for logistics it would be easier if I stayed close to the rest of them. I was thankful for his begging and found myself in a lovely room that even had a bathtub. I was in heaven. 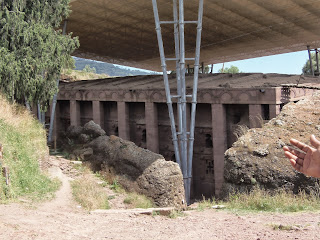 After lunch we began touring the churches. The first time I saw images of the rock-hewn churches of Lalibela was in a restaurant of the same name in New Haven, Connecticut. I was a teenager. The images captured my imagination and I wished someday to visit this distant land of Ethiopia, these astounding churches in the rocks. I had dreamed of arriving at the churches, walking along a plateau to suddenly be confronted with a deep opening in the ground, a church in the center. I was not prepared for the beauty and mystery we found there. The experience moved me and I felt something shift in my heart. The first day we visited one half of the churches, learned about the history, the architecture, the mystery. One King, King Lalibela, was responsible for most of the church construction. It is said that due to the speed of construction that angels took the nightshift. UNESCO has put absolutely ugly structures over the churches to protect them. They have been damaged by the elements, by earthquakes, but still they stand. Only one having completely collapsed. At one point we journeyed under the ground, through a tunnel that connected the churches. It is said that this experience is like going through the dark night of hell, to emerge in the light and sacredness of heaven (on the other side). It was so dark we had to hold hands - nothing could be seen. 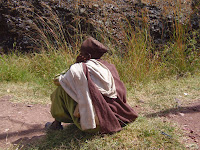 Lalibela is a sacred place and I cannot pretend to have retained all of the information our guides provided us. There is a link at the top to read more about what the history of the place is about. But, just to be there, with all these relics, paintings, stone carved with simple tools from the bedrock, gives pause. All the churches are in continuous use from the 14th century. You can attend mass any day of the week - the Sunday mass is meant to be most impressive, though I wasn't there to make it. The images in the architecture are the same images you find in Axum, the former capital town in the north. Axum has a very ambiguous history. Each window, each carved image, has meaning. Faded paintings on wooden doors, on rock ceilings, on mud walls speak of something mysterious. I wish I understood more about the Ethiopian Orthodox Church. They have many different saints and stories from the Catholic church. The stories are fascinating about saints who live with wild animals, cannibals who are saved from their ways by Mary, so much dedication to Mary stories in general. Someday I will pay more attention and write these things down... 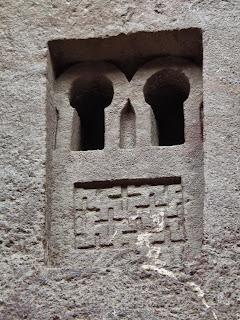 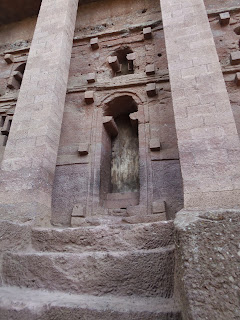 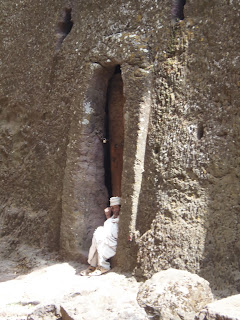 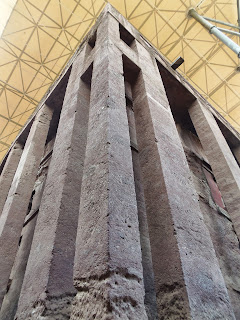 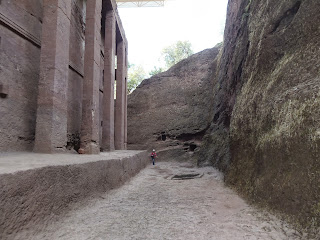 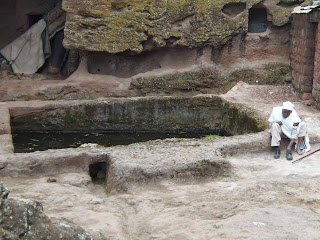 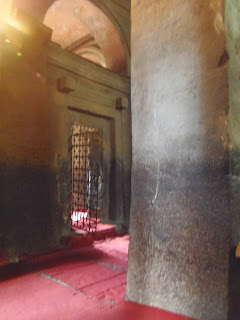 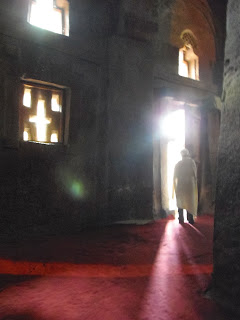 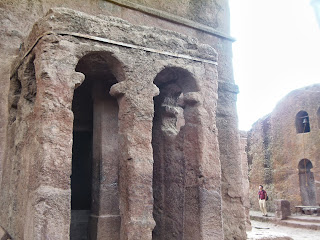 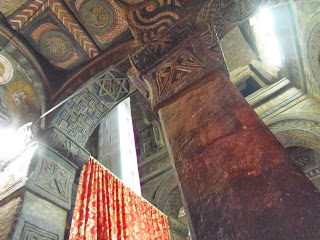 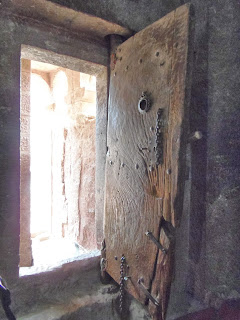 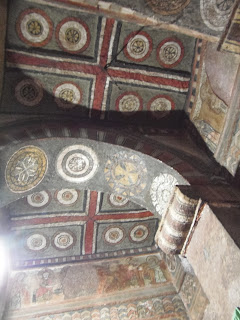 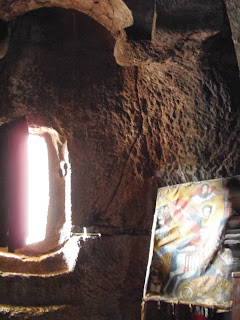 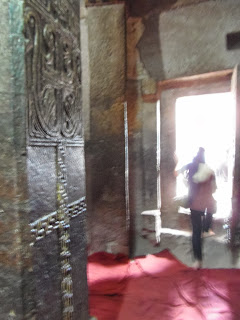 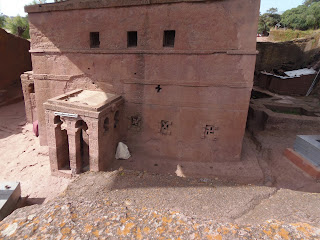 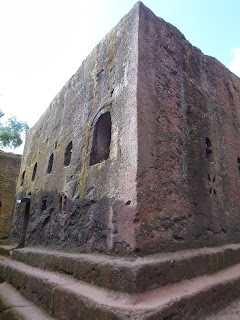 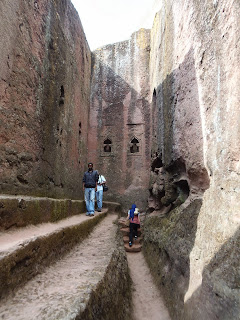 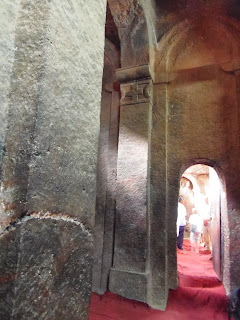 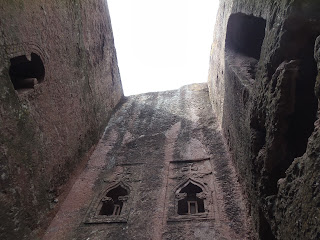