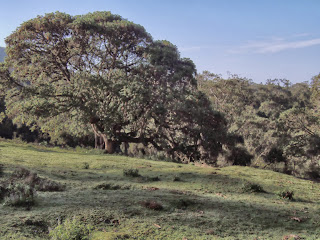 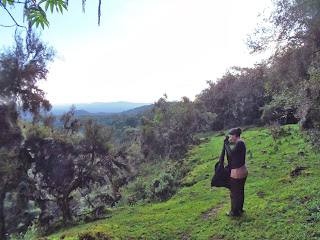 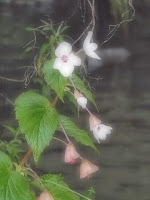 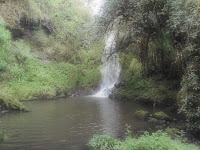 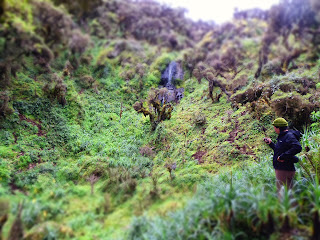 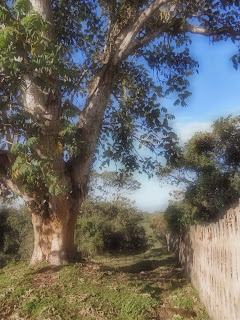 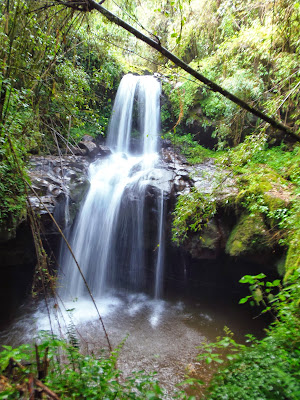 Being in the National Park renewed my spirits and made me fall in love with Ethiopia all over again. I woke up on yet another beautiful morning in clear crisp mountain air and breathed easy. Ramona and Tracy, the US Peace Corps couple I was put into contact with through a friend in Oregon, graciously opened their home to me and the night before we planned out hikes that corresponded with some of their field work. They've been working on forestry and biodiversity issues in the forest with local counterparts, especially with the bamboo forests. We spent the next few days hiking for hours, eating Tracy's delicious cooking, playing cribbage, and having a laugh. The two of them tromp around the forest confidently, and the trekking reminded me of exploring the New England woods on the weekends of my childhood. The altitude made it hard for me to keep up, but they were both patient with me. We followed cattle trails straight up the mountainside, were followed by the hooting and hollering of children, met with a few people along the way.
This part of Ethiopia is largely composed of the Oromo People who speak Oromiffa. When Ramona or Tracy were greeted by their neighbors, an interesting staccato exchange ensued. I listened in fascination as the greetings were fired off back and forth and asked what was being said. Ramona explained that the questions were, "I have health, do you have health? I have peace, do you have peace? I am present, are you present?" And so on. An Ethiopian friend later told me that these questions are usually asked in a sequence of three. Someone may mask the truth during the first question, start to indicate what is really happening by the second round, and tell the truth in the third round. I was told that the Oromiffa speakers have had millennia to perfect the number of times needed to elicit the truth from their neighbors. 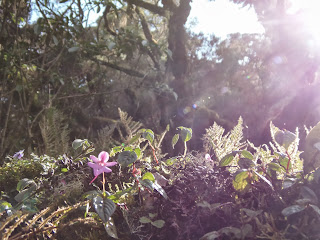 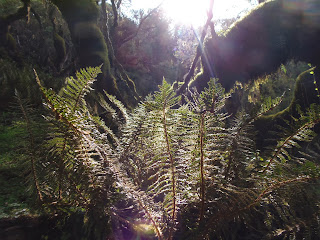 The first day we lingered in the morning kitchen as the clouds rolled in outside. We set out and I was immediately taken by the beauty all around. Birds of prey, horses grazing, ibis, goose, and all sorts of songbirds caught my attention. There are several endemics that Tracy pointed out which are less striking because of their plummage, but more for their personality. We walked along cattle tracks in a steady incline until we reached the forest proper, at which point the path took a steep turn up. The constant presence of high humidity allows for a forest reminiscent of the Pacific Northwest forests. Thick underbrush of flowers and ferns covered the forest floor. The hillsides are steep and so we spent most of our time going up or down these steep mountainsides. We reached the top of one mountain and the views were astounding. Unfortunately, many people have moved into the National Park and established houses and grazing areas and harvest wood. This is all illegal, but the local government turns a blind eye. Ramona and Tracy have done their best to record coordinates of new houses or new fences as they find them in their transect walks and research trips. The most destructive thing, besides the humans themselves, is the cattle grazing. People allow for their cattle to graze without restriction and the cattle are everywhere in the park. We followed their muddy trails through the trees and came upon often. 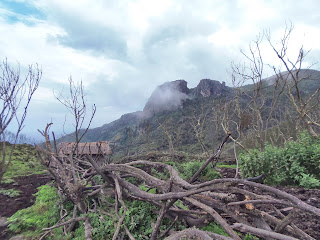 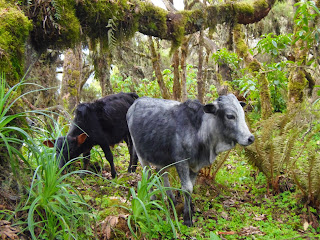 When we reentered the forest we came upon a few black and white Colobus Monkeys. We sat to watch them play and eat for awhile. So amazing how they move through the trees, their fur moving in this flowing dramatic way. Ramona told me that they call them skunkies, because their coats remind them of skunks... 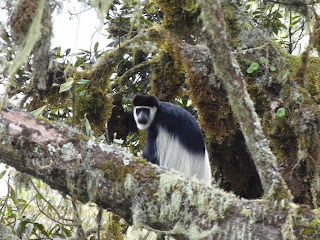 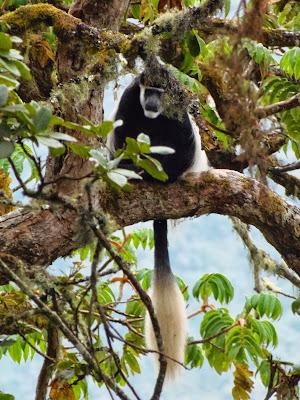 We continued descending the mountain through a bamboo forest looking for the elusive Bali Monkey, with no luck. We stopped to look at some waterfalls, eat a lunch, and enjoy the tranquility. We also watched the sunset and by the time we got out of the forest, night was moving in fast. These insects, like cicadas, started singing and made such an overwhelming sound that it was like a big deafening wave of insect music moving across the hills through the trees. I could not believe how loud it became! We got back to the compound after dark and they went about preparing a dinner. We had been out for about 8 hours and were all a bit weary and hungry. We finished the night playing cribbage. I had never played, but they taught me the rules and it was a competitive laugh all around.

Though Ramona and Tracy have an ideal Peace Corps life in one way, they are located very far away from major towns and get to live in a beautiful cloud forest with amazing wildlife experiences, the challenges of living with little electricity (just the solar), outdoor toilet, rainwater (when there is rain, some parts of the year are dry and they have to haul their water the same way the locals do), living in another culture - religion, language, customs, food - are really intense. Just a simple thing of going to the nearest town to resupply can take days of patiently waiting for a bus that is not too full to pick them up. But, as I stayed with them I saw that they were lucky in that they had each other and that they had skillfully made their lives as comfortable as they could with what they could pull together. I was quite impressed with how easily Tracy could whip up a tasty healthy dinner on a camp stove and how they just roll with the darkness by using headlamps and little solar lamps. They told me that they are sad to leave their post, that no one will backfill them, the program is finished for now, but they are curious as to their futures back in the States. I hope that they find something as rewarding as this experience has been when they go home again.